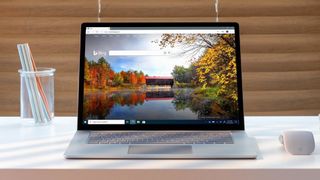 Microsoft has revealed that its new Edge Chromium browser is set to launch on January 15th.

The upgraded browser will be available on Windows 10, Windows 7, Windows 8, and macOS in 90 languages

For those looking to get an early taste, a beta version that Microsoft is calling a "release candidate" is also available to download today.

Microsoft released an initial beta version of the new Edge back in August, promising a host of new tools and updates for users as it looks to claw back market share from Google Chrome and Mozilla Firefox.

The company debuted a new logo for Edge a few days ago as a teaser for the release, with the image hidden behind a series of puzzles and clues posted to the web by Microsoft employees.

The new and improved Edge has been built from the ground up – using the same Chromium foundation as Google Chrome – to be more appealing to both end users and web developers.

It will come with sync support across Windows, macOS, iOS, and Android, meaning you'll be able to carry over your passwords, web history, favorites, and personal settings.

Microsoft has also added a new tracking prevention default in Edge, meaning users shouldn't be concerned about who is seeing their data online. Already present in both Firefox and Chrome, the new feature is on by default, greatly improving user privacy, with a new InPrivate mode also allowing online searches and browsing to not be attributed to you.

But the new Edge will also feature some business-focused features as Microsoft looks to pull in all kinds of users.

This includes an easier way for workers to search for information within their own companies, opening up the address bar to allow users to find co-workers, office locations, floor plans for a building, and even get definitions for company acronyms.