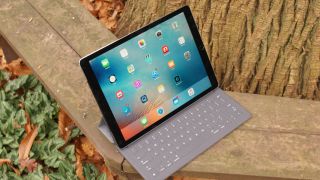 The new iPad has certainly been praised by reviewers

The iPad Pro is one powerful tablet, that much is obvious, but some new benchmarking has underlined just how powerful Apple's new slate is, with the device beating out some of its MacBook stable-mates.

The iPad's engine is a dual-core A9X chip running at 2.25GHz backed up with a chunky 4GB of RAM, and it makes quite a difference, coming close to doubling the benchmark scores of the A8X toting iPad Air 2 in single-core Geekbench 3 (as recorded by Ars Technica).

But it's the Pro's performance against laptops which is most interesting, particularly given the comments Tim Cook recently made about this new iPad being the final nail in the coffin of the PC (while Apple's CEO still loves his Mac, he noted "these days I'm travelling and I only have my iPad Pro and iPhone with me").

Geekbench 3 multi-core isn't so close, but the iPad Pro still manages to easily outdo a 2015 MacBook with a Core M-5Y31 processor, and comes within a few hundred points of that MacBook Air with the Core i5-5250U.

The graphics tests Ars Technica carried out proved even more eye-opening, with the iPad Pro's A9X chip beating out Intel integrated graphics all the way up to (and including) the Iris Pro 5200 which the 15-inch MacBook Pro sports, and the Surface Pro 4's Intel HD 520 solution.

So the iPad Pro packs powerful enough hardware to be a genuine laptop replacement, with more than enough grunt in terms of processor and graphics performance, but of course the experience on the software front certainly isn't the same as using a desktop computer.

As we noted in our review of the iPad Pro, iOS is still a very different proposition to a desktop OS – you can't truly multitask with it despite Apple's Split Screen mode, and while it's possible to tackle slightly more fiddly things like working in a CMS and uploading photos with the device, it's often more awkward than it should be.