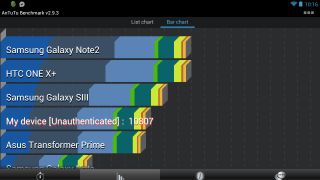 Benchmarking your mobile device can be quite insightful

When you buy the latest Samsung Galaxy S3, Apple iPhone, HTC One X or a Google Nexus 7 it's reassuring to know that it's as fast as you'd hoped for.

But beyond whizzing a few web pages up and down, and "testing" that Angry Birds runs nice and smoothly, just how do you check the speed of a device?

For an age the process has been dubbed benchmarking after the standard bench mark symbol used by surveyors.

On computer systems it's a standard test that can be rerun many times to assess performance across a range of devices in a comparable way. Generally a benchmark will involve testing a single aspect of performance, while an overall system score can be found using a suite. Though it can be somewhat meaningless.

Tests cover raw processor speed or how fast it performs functions, storage access speeds, 3D performance with how many polygons it can draw a second and how detailed effects it can handle, and finally task-specific tests such as browser speed. Because of the range and complexity of these tests, it's rare that a single one covers all bases. A

nother issue is that cross-platform test for Android Vs Apple Vs Blackberry Vs Windows RT are even more complicated, and somewhat rare. But to get you started here are our recommendations.

The latest benchmark app for Android is called Vellamo and you can install it for free from the Google Play Store.

Developed by Qualcomm, this is the company that designs and manufacturers some of the most widely used phone and tablet processors, so it should know what it's doing. This latest version of Vellamo has been updated to fully test browser speeds running HTML5 tests, plus a suite of dedicated processor speed-tests that are called Metal. An Extras section also includes streaming video tests. The tests can take a while to run but once complete you can compare your results with a host of other Android devices.

One of the most widely used benchmarks for Android devices is called AnTuTu and it's free on the Google Play Store. Everyone loves a big number and AnTuTu provides just that, from its comprehensive range of tests – that drive everything from the 3D graphics to the processor as hard as possible – it manages to derive an overall score for your device. You're then ranked against a raft of other popular devices or you can upload it to the online rankings. While this is great for a quick off-the-cuff compraison it's doesn't exactly provide insight into performance differences between devices.

How do you boast that your Apple iPad 3 is faster than your friends Samsung Galaxy Note? It's not easy but one of the few good choices is the 69p Geekbench 2 available on the Google Play Store and from the Apple iTunes App Store.

As the name might suggest it's somewhat more complex to understand but can provide a simple number that you can argue about down the pub. Being available on both Android and Apple iOS it does help fuel the argumentative fires. It's more of a limited test only really pushing the processor and memory aspects.

Another cross-platform benchmark that runs on Apple, Android and anything that has a web browser is SunSpider found at webkit.org. his tests something called JavaScript, which is a core aspect of web site and browser performance. It runs a suite of browser-based tests multiple times and will generate a time in milliseconds, the lower this is the faster the browser and processor is.

Finally we have the current lead for 3D benchmarking the imaginatively named GLBenchmark from Kishonti. Pure 3D benchmarks often come under fire - usually from the party that has the poorer score - that they're unrealistc or don't represent real gaming performance. There is a point about lack of optimisation within these that a game could leverage, but the point is these are benchmarks that provide a level playing field and a guide to overall performance. Not potential performance gained via tweaks.

When running GLBenchmark it's important to keep in mind that different devices have widely different resolutions. So you'll see the Apple New iPad 3 getting lower or similar scores to the supposidly slower Apple iPad 2, that's entirely down to the far higher resolution and so number of pixels the New iPad GPU has to push around.