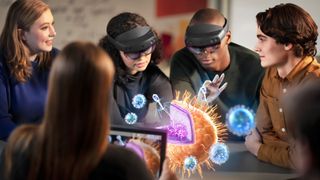 Microsoft has finally launched its HoloLens 2 mixed reality headset aimed at enterprise users, but the huge $3,500 (around £2,800, AU$5,000) price tag could make this a device that’s attractive to only a very limited amount of people.

Microsoft’s follow-up to 2016’s original HoloLens, the HoloLens 2 comes with a new design that’s more ergonomic – with a lighter weight that makes it more comfortable to wear for long periods of time.

There have been other improvements as well, with the field of view substantially increased, from 34 degrees to 52 degrees. The larger the field of view is, the more of your line of sight is covered by the HoloLens 2 and the information it displays.

One of the biggest criticisms of the first HoloLens was its very narrow field of view, which made the headset less immersive than its competitors.

The HoloLens 2 also features new gesture tracking, allowing you to perform gestures in the air to control objects and menus the HoloLens 2 displays – such as dragging and dropping objects or tapping a virtual button on your wrist to pop up a menu.

While the original HoloLens was primarily aimed at enterprise users and businesses, there were a few games and creative apps, like a special version of Minecraft, which could appeal to a wider audience.

However, the HoloLens 2 is aimed squarely at business users – as the incredibly high price tag hints at. Businesses that require hands-free 3D visuals – such as in manufacturing – are the primary target audience, but many companies may view that $3,500 asking price just too steep.

The HoloLens 2 will be sold in the US, UK, Australia, France, Germany, Ireland and New Zealand, and Microsoft has confirmed that the original HoloLens will still be supported – though it won’t be able to run apps with gesture control support.