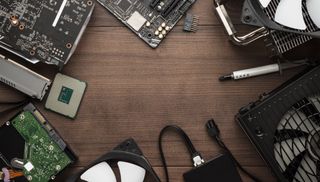 The latest Steam Hardware & Software Survey is out, giving us a glimpse of what kind of rigs gamers are using when playing on Steam – and it looks like Windows 10, Intel and Nvidia are dominating PC gaming hardware and software.

While the Steam Hardware & Software Survey only logs Steam customers (and ones who have opted into the survey), due to the huge popularity of Steam, it gives us an excellent idea of what kind of hardware and operating system PC gamers are using.

Don't forget – the Steam Summer Sale 2019 is currently running and is offering some brilliant deals on games.

When it comes to operating system, Windows is by far the most popular OS, with a combined 96.49% of gamers running a version of it. In contrast, only 2.75% of respondents are running macOS, and just 0.76% are running Linux. That last number is disappointing considering Valve’s (the company behind Steam) support for the open-source operating system, and news that Steam will no longer recommend using the next version of Ubuntu – the most popular Linux distro for gamers – might cause this number to drop further still in the future.

Out of all the versions of Windows used by Steam customers, Windows 10 is the most widely used, with the 64-bit version installed on 70.92% of PCs – an increase of 3.08%. It looks like gamers are migrating from Windows 7 as it approaches its End of Life phase (when it will no longer be supported by Microsoft), as use of the older operating system dropped by 2.09% to 21.34%.

This will be welcome news to Microsoft, which is keen to get as many people to upgrade from Windows 7 to Windows 10 as possible. However, many PC gamers are still clinging on to Windows 7. Microsoft will want to get them to upgrade before January 14, 2020, when it's dropping support.

When it comes to hardware, both Intel and Nvidia continue their dominance. For graphics cards, 75.53% of Steam users run Nvidia GPUs, compared to 14.75% of users who have an AMD card.

Meanwhile, its flagship GeForce RTX 2080 Ti is used in 0.42% of Steam PCs. It seems that despite its dominance, Nvidia isn't convincing gamers to splash out big money on its latest high-end GPUs. Will the launch of the RTX 2060 Super and RTX 2070 Super cards change this?

Meanwhile, the most popular AMD card with Steam users is the AMD Radeon RX 580, which is installed in 1.32% of Steam user’s PCs.

As far as processors are concerned, Intel has easily kept its market-leading position, with 82.01% of Steam users having one of its processors, compared to AMD’s 17.88%.

These results will be disappointing for AMD – and its fans. Despite the company releasing a number of excellent products for both CPU and GPU, it looks like it’s still struggling for market share. Its CPU results are particularly concerning, as there’s been a drop of 0.13 percentage points since May.

We like a bit of competition in the market, so seeing Microsoft, Intel and Nvidia continue their domination is a bit concerning, but credit where it’s due: these companies have done well to continue to make products that are appealing to gamers.