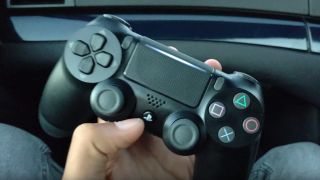 Yesterday, Eurogamer confirmed the existence of the PS4 Slim through leaked images and video of the unit.

Now, a new video has revealed that the console won't be the only item receiving the redesign treatment – it'll also come with a slightly tweaked Dual Shock 4.

Confirmed on Twitter by the person who first revealed the 'slim' PS4 images, the updated Dual Shock 4 appears to have a see-through strip along the top of its touch-pad, allowing light from the light bar to shine through on the controller's face.

Why anyone would actually want extra opportunities to see the controller's light bar is beyond us, though it's possible that there are PSVR-related reasons for the design tweak.

You can watch the video of the tweaked Dual Shock 4 controller below.