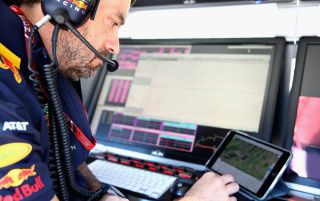 IBM has extended its relationship with the Aston Martin Red Bull Racing Formula 1 team to include services from The Weather Company (TWC).

Best known for the consumer-facing Weather Channel, TWC works with businesses around the world to supply real-time, hyper-accurate weather information.

The company, which already works with NASCAR and Chevrolet’s IndyCar operations in the US, will now be offering its services to Red Bull as part of the latter’s wide-ranging partnership with IBM.

The 2018 Formula 1 season sees 21 races at different locations all around the world, each with their own particular weather quirks and peculiarities, and in a sport where the margins of victory can be tenths or even hundredths of a second, the need for even the smallest extra advantage over your rivals can be key.

"Formula 1 is really a data-driven sport,” Michelle Boockoff Bajdek, IBM’s global head of marketing and weather evangelist tells TechRadar Pro, “weather is probably one of the most critical factors when it comes to Formula 1 racing."

"We're seeing teams try to squeeze incremental improvement into the smallest aspects of both car development and race strategy."

TWC’s data, sourced from over 2.2 billion locations across the globe using what Boockoff Badjek calls, “one of the most sophisticated and powerful analytic engines available”, is transmitted to the team’s race operations centre where it can be immediately be utilised for potentially race-changing decisions.

For example, detecting a rise in track temperature could lead to the team deciding to put on a harder compound tyre at a scheduled pit stop to lower the risk of punctures, or spotting an incoming rain storm could allow the team to get a race-winning jump on its rivals in getting wet-weather tyres on.

The Weather Company is able to project information down to a half-kilometre resolution, meaning that the team is able to get complete coverage of whichever track they are at to monitor conditions - particularly useful at the likes of Spa or Silverstone, where it can be raining in one sector but be dry in another.

The company is also providing historical weather data from the last 30 years, allowing the team’s strategists to make pre-race predictive models based on previous races to make possibly vital adjustments.

Although the 2018 season has seen almost entirely dry and warm conditions so far, Boockoff Bajdek notes that pre-season testing in Barcelona back in February was hit by rain and even snow, throwing many teams off guard.

She adds that a typical Formula 1 race set-up allows for just an operating temperature window of just two degrees, meaning that any fluctuations outside of this could lead to failures and retirements.

“Having access to the most accurate and precise weather on the planet is critical,” she notes, "You want to have the best possible weather insights available.”

And with Formula 1 often forming the test-bed for many technologies found in today’s road cars (power steering and kinetic energy-recovering being notable examples), TWC is always looking to expand the usage of its tools.

As Boockoff Bajdek notes, "every company in the world is affected by weather...it affects everybody!"