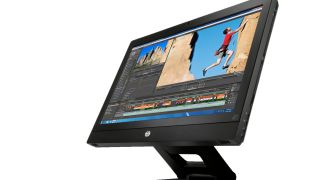 HP isn't sitting silently by as the tech winds whirl through CES 2014. The company has announced the second generation of its 27-inch diagonal display workstation, the HP Z1.

The HP Z1 G2, as the new machine is called, packs Windows 8 Touch and optional Intel Thunderbolt 2, turning it into Hewlett's kicking-est All-in-One workstation yet.

Not due on the market till later this month, the Z1 G2 is aimed at workers and specialists in CAD design, graphic arts and university-level education. Because of Thunderbolt 2, the new AiO supports 4K video workflows - ideal for folks who need to work with high-res.

It's also the station's Thunderbolt tech that jumps it over the competition HP claimed, but there are other nuts and bolts that make the still un-priced machine worth a look.

In addition to faster connection speeds, the workstation carries a 27-inch diagonal LCD white LED display. The screen sits atop a 2560 x 1440 resolution and is 8-bit

HP is offering the Z1 G2 in two base configs: non-touch and no glass and touch with glass. The latter version features 10-point touch with an edge-to-edge display while the touch-less version sticks it to reflections with antiglare capability.

Speaking of processors, HP touted the new AiO offers support for up to 95W chipsets.

Equipped with dual-tone, front-facing speakers and DTS Studio Sound Audio, the Z1 G2's specs round out with ECC memory and RAID storage options.