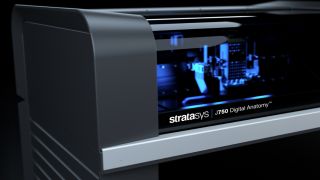 Stratasys has come up with an innovative new 3D printer which can print realistic models of human organs designed to be used in training surgeons for the future, and avoiding having to use cadavers for such purposes.

The company’s new J750 Digital Anatomy 3D Printer is capable of producing models that replicate the same feel and biomechanics of human anatomy, so provides an ideal training solution as such, Stratasys believes.

Existing methods can be more expensive, less convenient, or have obvious ethical issues – like using animals in the latter case (which aren’t human anatomy, anyway). Using cadavers doesn’t give the same feel as live tissue, and also requires the expense of a controlled environment, and virtual reality training has its obvious limitations in terms of realism, too.

Stratasys says that its 3D printer “recreates actual tissue response” and doesn’t require any special environmental conditions to be used.

The device has already been tested by several organizations, including the New York-based Jacobs Institute, which has been using the J750 to recreate key vascular components for surgical training purposes.

Dr. Adnan Siddiqui, chief medical officer at the Jacobs Institute, commented: “We believe these models give us the best opportunity to recreate human physiological conditions to simulate actual clinical situations and to study new devices to establish their effectiveness before introducing them to patients.”

And over in France, Bordeaux University Hospital has been using the Stratasys J750 for printing lifelike models of patient kidneys in complex tumor removal cases.

It’s expected that the 3D printer will be used by the makers of medical devices, and academic medical centers for training.