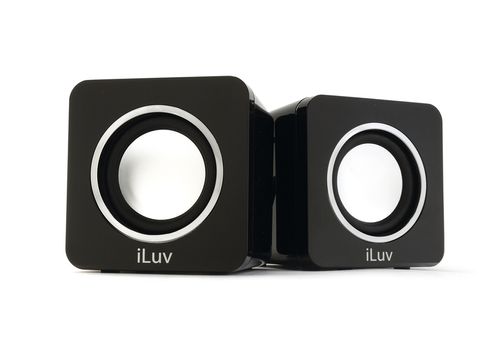 Truly a David among the Goliaths of this speaker test, iLuv's Rubik's Cube-size Boom Cube speakers are smaller than most of the 2.1 systems' satellite speakers.

Add to this the fact that iLuv is a stablemate of the low-cost UK electronics manufacturer Goodmans, and we were worried that the Boom Cubes would be crushed – both literally and metaphorically – in our tests.

Fortunately, the Boom Cubes are a pleasant surprise. The sound they produce is incredibly rich and detailed, and feels like it's coming from the space around the speakers rather than the front. They prove more than adequate for music and movies, and even for a little light gaming.

Admittedly, without a Tardis-size subwoofer, performance is never going to be all that great, but it's definitely there – even if it didn't lead to the room-shaking vibrations of dedicated bass speakers.

At first, iLuv's decision to provide USB power feels a little odd. We were desperately trying to get the pair of speakers recognised as a USB device until we realised that there's a separate 3.5mm jack to plug them into the headphone socket. It adds a little heft to the package, and it means that you won't be able to use the speakers with a phone or MP3 player without a separate USB power source. Which is a shame, because their compact size makes the Boom Cubes ideal travel speakers.

We're not sure about the grill-free design, either. The speakers look sleek and Apple-esque as a result of this design decision, but anyone with kids will tell you how eager they are to poke exposed speaker diaphragms to a fuzzy-sounding death. We did give them a little prod (an essential scientific part of any in-depth speaker test) and they felt solid enough, but we don't know how they'd stand up in the long term.

Overall we're impressed with the design of these lovable little cubes though. They sound a lot bigger than they look, and the price is very reasonable too.