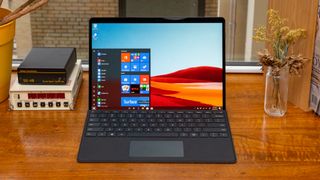 Windows 7 is about to hit end-of-life, and Microsoft’s advice for businesses still running machines with this OS is that it’s likely a better course of action to buy entirely new PCs, rather than upgrade existing ones to Windows 10.

This comes courtesy of a web page Microsoft has concocted to push new Surface devices and Microsoft 365, which contains a FAQ on Windows 7 no longer being supported.

This points out the obvious – that anyone continuing to use Windows 7 is potentially running big risks because the OS will no longer get security updates, so any vulnerabilities will remain unpatched wide-open holes for hackers or malware peddlers to leverage.

If you own a Windows 7 PC, Microsoft’s advice is: “For most Windows 7 users, moving to a new device with Windows 10 Pro is the recommended path forward.”

This is because with a new Windows 10 PC, Microsoft argues, you will be able “to take advantage of the latest hardware capabilities”, and also that upgrading existing Windows 7 hardware could result in hardware and/or driver compatibility issues.

Apparently there are some 440 million Windows 7 users out there, and while some of those will be home users, a good chunk of them (probably the majority) will be businesses.

Naturally, even home users of Windows 7 may face compatibility issues when upgrading, particularly if coming from much older hardware – which may well be the case given that the operating system came out in 2009, well over a decade ago now.

Going back to the case for business users, the other major line of persuasion Microsoft employs is that upgrading Windows 7 machines to Windows 10 could actually be a more costly endeavor than buying new PCs in the long run.

Microsoft explains: “All PCs that are more than four years old can cost you more than you realize. PCs older than four years are 3x as likely to need repairs, resulting in 128 hours of lost productivity – a cost of both time and money. Maintaining and repairing those devices can add up to $515 per PC a year [based on a study of SMB PCs by Techaisle in 2018].”

Of course, it’s highly debatable as to exactly how the figures might pan out for any particular business, but you get the general gist. There can be no real argument that older hardware is more likely to fail, if only on a wear-and-tear basis, and that could certainly result in lost productivity.

Whatever route you decide to take – whether that’s new PCs, upgrading to Windows 10, or even something more radical like switching to an alternative OS – it’s best not to hang around given that after January 14, which is just a day away now, Windows 7 is not a safe place to be.