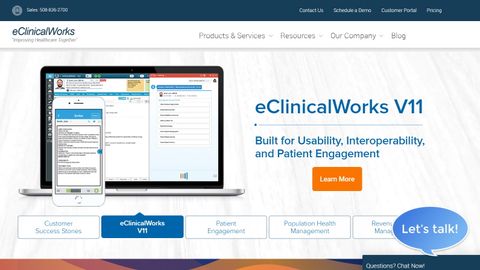 While eClinicalWorks is a leader in EHR with their private grid cloud, their less than ideal support, and difficulty transitioning to another EHR leave us cold, and leads us to look at other choices.

eClinicalWorks claims to be “The largest Cloud EHR in the nation,” with over 5,000 employees at a company with over 20 years of experience.

Today, this company serves over 850,000 medical professionals worldwide, including in excess of over 130,000 physicians and nurse practitioners, and 800,000 facilities, with an annual revenue that exceeds over $500 million annually (£405 million).

Powering these practices is the eClinicalWorks private grid cloud, that has nine data centers in strategic locations to insure not only that the clinical data will remain safe, but also instantly accessible.

Unlike the vast majority of their competition in the EHR segment, eClinicalWorks provides the pricing upfront, rather than requiring a custom quote to get an idea of the cost. Also offered is free conversion from your existing EHR to eClinicalWorks, a valuable benefit to get this new EHR seamlessly up and running.

The lower tier EHR only plan, has a number of features, including the EMR, a patient portal, referral management, and meaningful use dashboards. Also provided are eClinicalMobile, e-prescribing with formulary checking, and disaster recovery in case of data loss. There is no startup cost, and this tier costs $449 (£364) per month for each provider.

A higher tier plan, EHR with Practice Management is also available, and this runs a significantly higher $599 (£486) for each provider monthly. This even more robust plan offers everything in the lower plan, with the addition of the modules for practice management, and billing implementation services.

A third way to price eClinicalWorks is to have it as “RCM as a Service.” This option includes most of the services from the other tiers, although notably absent are the EMR, and the e-prescribing functions, making this more for billing than clinical work. Other functions that do get added though are denial and rejection management, including a module for appeals at all levels. This tier is priced not as a fixed monthly fee, but rather at 2.9% of the practice collections, which should make it more affordable for some lower volume practices.

eClinicalWorks has plenty of features, as would be expected from this veteran of the EHR space. For example, it supports both voice recognition, and handwriting recognition as methods of inputting text into the system, providing flexible options to time hampered clinicians, and obviating the need for costly scribes to enter data.

Engaging with patients is an important aspect of growing and maintaining a busy practice, and particularly important with younger millennial patients. Many EHR’s do include a patient portal, which provides them a way to access lab and radiology results, request prescription refills, and to schedule appointments, which is done efficiently, and frees up office staff from these routine tasks. eClinicalWorks kicks this up a notch, with functions for check-in via a kiosk, and televisits which can convert an in-office visit to deliver the same level of care through an online experience.

Furthermore, internet presence can be further strengthened via online campaigns, that can communicate with patients, via their choice of “phone, email, text, Patient Portal or healow app,” for reminders about overdue visits, or other routine care such as a vaccine, mammogram or colonoscopy. Additionally, the campaign can be monitored via Messenger Analytics to tweak it along the way for success.

Folks complain that the service, while always available to contact, is often foreign outsourced, with reps having heavy accents. This issue gets magnified as these reps do not consistently understand the intricacies of complex medical issues, or healthcare billing. As problems occur, a trouble ticket needs to be created for each, with an often 24 hour delay in receiving a response, and when you hear from them, only the specific issue can be addressed, and anything else requires another trouble ticket, with another delayed response.

Finally, for those unsatisfied, transitioning off of eClinicalWorks is hardly a seamless process. There are reports of this company asking for charges in the thousands of dollars for each clinician to provide the chart notes created on this platform in a usable format. While we don’t expect any company to be happy when a customer wants to discontinue service, vital patient data should not be ransomed in a way that makes it so unpalatable to leave, putting the organization in a quandary if they are unsatisfied with what their existing EHR is offering them.

eClinicalWorks provides support on a 24/7 basis with a live representative. Also offered are unlimited free webinars and videos. Initial training is on site and included for practices of up to 9 providers, although the airfare for the setup team gets billed separately.

eClinicalWorks does not have installed software, and rather gets used via a secure web portal. This model makes it a SaaS, with the data hosted in the cloud. This also means that there is no software to install for Windows or Mac, and no apps to install for iOS or Android.

eClinicalWorks is a popular EHR for many of the right reasons, with included transition from your existing EHR, and multiple tiers of product offerings. Concerns are raised for the support process, the lack of consistency between modules, and the difficulty in moving off of this to another EHR. On balance though, eClinicalWorks is a leader in this segment for plenty of valid reasons, including their robust hosting of this EHR across their private grid cloud, the variety of methods to input data, and the robust tools included for patient engagement.