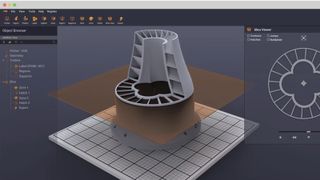 Dyndrite has been showing off what it describes as a state-of-the-art Additive Manufacturing Toolkit (AMT) which uses the power of a GPU to make 3D printing faster, and more streamlined in general.

AMT was unveiled by Seattle-based Dyndrite over at Formnext, with the company having built the toolkit around its Accelerated Computation Engine (ACE), which is a ‘GPU-powered geometry kernel’.

The idea is to speed up build preparation and accelerate production in additive manufacturing – a fancy term for 3D printing – with the toolkit delivering a number of manufacturing-oriented capabilities.

Going from design to printing in seconds rather than hours leveraging the power of a GPU is clearly a big step forward, and Dyndrite compares it to Adobe revolutionizing dot-matrix printing with PostScript back in the 80s.

Dyndrite CEO and founder Harshil Goel told VentureBeat: “[Adobe’s] PostScript was a powerful computer language that essentially described a printer and the output. We are doing the same, describing a three-dimensional object for a 3D printer.”

Dyndrite notes that its ACE geometry kernel and AMT build processor were designed from scratch with a ‘first principles’ approach, using modern technologies to deliver on the production needs of customers across the aerospace, medical, automotive, energy and service bureau markets.

The hope is that this sort of tech could be extended to benefit a wider swathe of 3D printer users in the future, of course.

The toolkit allows for the management of terabytes of manufacturing data, and the ability to print higher-order geometries such as splines, the company further observes. There’s also the ability to dynamically adjust parts on-site during the printing process, in order to achieve better quality (and indeed throughput).

Dyndrite also announced that it has formed a partnership with Renishaw, a prominent firm in the world of metal 3D printing, to integrate its AMT into Renishaw’s QuantAM build processor.

“ACE offers both a C/C++ and integrated Python API, enabling broad accessibility by both the traditional developer market, as well as end-users such as mechanical engineers and students.”