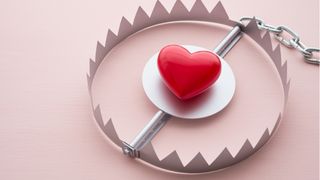 It's the most romantic day of the year - but that's no reason to let down your guard when it comes to online security on Valentine's Day.

New research from security firm ESET has claimed that over half of British singletons (52 percent) are more likely to fall for a catfishing scams around Valentine’s Day.

Loneliness and the pressure to live up to the social expectations made lonely hearts more likely to fall for online scams, with one user scammed out of £5,000 by someone he met on a dating site.

ESET's Catphishing study surveyed 2,000 people across the UK to examine their security habits, finding that 71 percent don’t do background searches before meeting their date from online dating sites, whether this is searching on Facebook, Google, Twitter, or other platforms to make sure they are meeting a real person.

ESET found that many of the respondents admitted they didn’t know how to protect themselves online, and 13 percent admitted that using online dating sites or apps would make them more vulnerable.

“It’s disheartening to see so many bad actors taking advantage of vulnerable and lonely people around Valentine’s Day," Jake Moore, Cybersecurity Specialist at ESET, said. "When emotions are at play, individuals often lose focus of what they need to do to keep themselves safe online, and so can fall victim to scammers who are pretending to be someone that they’re not."

"The sheer number of profiles found on dating sites, combined with the speed at which online relationships can develop, provides an ideal breeding ground for catfish- people who pretend to be someone they’re not in order to scam and exploit those looking for love. The consequences of this can be extreme, as scammers may steal their victims’ identities, lure them into dangerous situations, or defraud them of thousands of pounds."