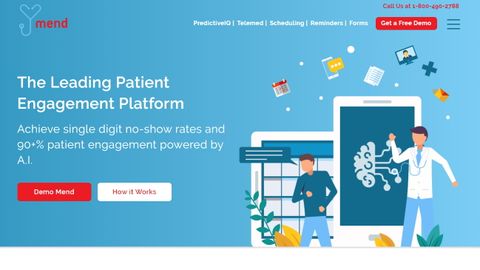 Mend makes the bold claim that they want to revolutionize the way healthcare communicates via a cloud-based solution. It is a US-based company, and a relative newcomer, being founded in 2014. Mend goes beyond just a telemedicine platform, and incorporates features to engage patients on a richer platform, with the goal of reducing ‘No shows,’ and raising revenue.

Mend makes the effort to go beyond just providing a telemedicine platform, going further to incorporate telemedicine into patient engagement. They dub this their “One Complete Unified Front-end Solution,” composed of the following modules that are designed to complement each other: Telehealth, Digital forms, No-show/Cancel Prediction, Reminders, Patient Scheduling and Integration.

Through these modules, Mend boasts some impressive results. These include recapturing $1 million (around £750,000) in lost practice revenue (based on a 10 provider practice), an impressively high 99% connection rate via their telemedicine module, and an engagement rate for digital forms that exceeds 85%.

A challenge for scheduling patients is the infamous ‘No-shows,’ and it’s too often the case that repeat offenders will continue to make appointments, and then simply not show up to their appointment – Mend indicates a 23% average No-show rate globally. This then makes it difficult to schedule the other patients, with traditional solutions of charging patients for less than 24 hours of cancellation notice difficult to implement, and likely to anger patients – or overbooking appointments making everyone suffer for the few patients that did not arrive, in attempts to maintain profitability of the practice.

Given these challenges, Mend offers a novel AI machine learning algorithm. Their PredictiveIQ can figure out those patients unlikely to show up for their appointment, and then turn this into actionable intelligence by indicating these high risk appointments in the scheduling module. Furthermore, Mend also tries to prevent the No-shows with automation of appointment reminders via text, email, and phone calls.

This reduction in missed appointments also gets applied to Mend’s telemedicine offering, which claims “Consistently average single digit no-show rates.” Other benefits include no required software downloads for patients to connect, and an over 99% rate of success connecting. Another benefit claimed is that with Mend, an HD video stream can be maintained on lower bandwidth connections. Finally, it is fully HIPAA compliant.

Mend is generally well-liked, and the drawbacks, aside from the support and unclear pricing (we’ll discuss the latter shortly), seem to be scattered and few, rather than the more pervasive issues that seem to be more prevalent with other providers in the telemedicine space.

Some complain that the web-based system is slow to load, which can be frustrating when trying to book patients for appointments, for example. This issue is apparently exacerbated with a less than robust internet broadband connection, or over Wi-Fi, although Mend indicates that they have significantly worked on this issue based on user feedback and that it runs “very fast now.”

Also, users complain that Mend’s support, while quick to respond to issues, rarely seems to be able to resolve them, or at best, only temporarily for the one particular patient.

Mend gets utilized via a web browser, and does not require installation for desktop use. It is a SaaS with cloud storage, which allows it to be used on the widest variety of platforms. There is also the option for both iOS and Android apps for mobile use.

Details for support are missing from the Mend site. We did find a phone number, and there is also the option for online chat, but the hours of availability for both are frustratingly left more amorphous – but the company does indicate that support is provided during off hours and weekends.

There is also the option to use the Mend Knowledge Base, which has answers to a somewhat meager four General Questions, along with a Troubleshooter, and Technical Recommendations.

One shortcoming of Mend is the lack of a free tier, and furthermore, there isn’t any free trial – although at least there is a free demo.

Pricing info is lacking on the Mend website, but elsewhere we did find a starting price of $99 (£75) per month, although it is unclear what this covers, and what additional options are available and how these are priced.

More specific pricing does require contacting Mend, which can be conveniently done via the online chatbot that pops up on their site, but truth be told we were a little put off that it required our email before we could ask for any information, and nudged us towards the free demo, which required providing more info, including a phone number and company name.

Also, a pricing inquiry could not be completed via the chatbot, and all we could secure was a promise that a team member would get back to us soon. Mend responded to our concern that they are an enterprise solution, and noted that: “Healthcare is complex, and pricing requires a conversation.”

Mend brings plenty to the table with their telemedicine solution, including offering mobile apps, HIPAA compliant video streams that stay HD even on lower bandwidth connections, and patient reminders to reduce those dreaded no-shows that significantly impact a practice’s bottom line.

Be aware of the downsides of opaque pricing, no free tier or trial, unclear hours for support, and user reported quirks like a system which is slow to load. In the final analysis, for a practice that wishes to engage patients via telemedicine, Mend offers a comprehensive suite of services at an affordable fixed price.