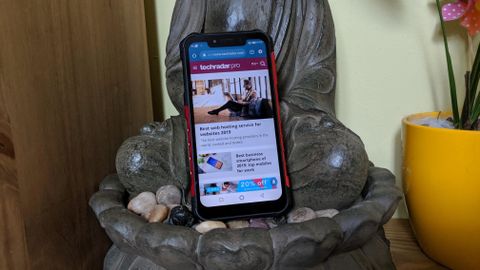 The Ulefone Armor 6E is an exceptionally well priced rugged smartphone. Android 9, a super fast CPU, wireless charging and a gorgeous display are the highlights. The fingerprint sensor is still problematic though.

Online Chinese retailer, Gearbest, sells the Ulefone Armor 6E for $200 at the time of writing. Note that while this price includes delivery, it is exclusive of any taxes that may be levied by the relevant authorities or the courier companies on behalf of the vendor.

Earlier this year, Ulefone launched the Armor 6 ruggedised smartphone, its annual flagship device, which set the tone (pun intended) for 2019. A few months later, as expected, Ulefone has debuted a slightly cheaper version - the Armor 6E - which looks like a twin on the outside and with only a few changes inside. Is it worth the extra $100 or so difference and how does it compare with the Armor 5? Let’s find out.

Visually, the Armor 6 and the Armor 6E are exactly the same: same dimension (166 x 84 x 12.2mm) and weight (266g). Ulefone probably decided to use the same body because of economies of scale. A bigger order means lower prices. Both siblings share the same characteristics: a blend of metal, polycarbonate material and soft rubber, rubber flaps covering the Type-C USB port, a hybrid SIM tray.

Sadly, there are no dedicated camera button and no audio socket as well. The rear contains the same UV sensor, a fingerprint sensor and two camera sensors, a 16-megapixel camera and a 2-megapixel one, compared to a 21-megapixel/13-megapixel combo on the Armor 6.

The Armor 6E is also certified IP68, IP69K and MIL-STD-810G against drops and the ingress of dust or water.

The Armor 6E that was shipped to us came with the following hardware:

This is where things start to get interesting; bearing in mind that the Armor 6 carries a 50% premium over the 6E, it is quite surprising to see that the cheaper model comes with a more powerful CPU. That’s right. The Armor 6 sports the Helio P60 while the cheaper Armor 6E is equipped with the P70.

The P70 has a slightly higher maximum CPU performance and a 12.5% higher max GPU frequency. Mediatek also claims that platform enhancements means that the P70 gets an up-to- 30 per cent boost in AI processing performance compared to its predecessor. Is that what we saw in real life tests? Scroll down to find out.

Other than the memory/system storage drop (6GB+128GB down to 4GB+64GB) and the camera sensors, the two devices are strictly the same. Same battery (5Ah), UV sensor, same display 6.2-inch with a 2246 x 1080 pixel resolution, wireless charging, NFC and face unlock.

The phone also comes with Android 9.0 while the Armor 6 featured the Android 8.1.

As expected, the 6E outperformed other Mediatek smartphones including the more expensive Armor 6, sometimes by as much as 12% (e.g. on PC Mark Work 2.0) although there were some anomalies as we saw on Seascape where Ulefone Armor 6. TLDR, this is a fast smartphone, probably the fastest you will find under $200.

This is how the Ulefone Armor 6E performed in our suite of benchmark tests:

Basemark: Did not run

3DMark IceStorm: Did not run

The fingerprint sensor is still a bit of an issue for us. We found that it worked 25 per cent of the time on average, which is better than the Armor 6 but still woefully inadequate. Fortunately you can still use facial recognition to unlock your phone.

As for its predecessor, the large 19:9 screen is bright and the 2.4+ million pixels that it handles translate into sharp fonts and icons with good colour reproduction. We don’t rate the large notch very well though but a near 92 per cent screen to body ratio, an oleophobic coating and a Corning Gorilla glass layer means that this screen on this phone is a great compromise.

A word on the bundled software: there’s quite a few of them. A child/game mode selector, a translator, a notepad and a toolbag that contains no less than 11 smaller apps. A barometer and a UV sensor are probably the most useful of the bunch.

At $180, the Armor 5 is an interesting alternative to the Armor 6E. It has a worse CPU, a slightly smaller form factor, a lower screen resolution - which may be a better option for battery life - and runs on Android 8.1. But other than that, it shares most of the features of its newer sibling. We’d still go for the 6E, given the $20 difference.

The Homtom Zoji Z9 retails for $170 at AliExpress, a significant discount compared to the Armor 6E, and like the Armor 5 has an older version of Android, a lower screen resolution and a smaller display size. The Z9 is better than the 6E for photography (it has two 21-megapixel cameras at the back), has more memory (6GB) and a bigger battery (5.5Ah).

Even cheaper at $132 and armed with a unique selling point (a massive 10Ah), the Homtom Zoji Z11 is another worthy candidate. It suffers from the same issues as the two other alternatives mentioned here - a slower processor, an older version of Android, a lower resolution and a smaller screen. It is bulkier but that’s because of the battery.

The Armor 6E improves on the Armor 6 when it comes to the processor used, the operating system and - of course - the price. Yes, Ulefone did cut back on the camera sensors, the system memory and system storage, and like its bigger brother it has a big fat notch, no 3.5mm audio port or dedicated camera/SOS button. But if these do not bother you, then the 6E is a spectacular bargain.

The display, the battery, the processor and the overall design are exceptionally good at this price. Indeed, this is the cheapest Mediatek P70 smartphone on the market at the time of writing at just under $200. We liked the fact that it is an Android 9.0 (again one of the very few rugged devices to run on the latest Android version) and offers NFC, 802.11ac plus wireless charging.