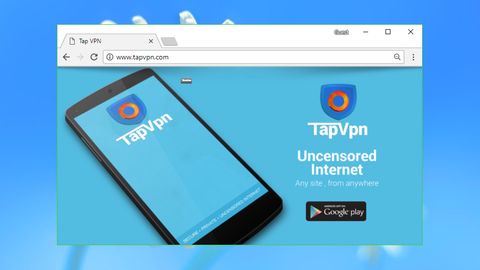 This Android VPN is a user-friendly Netflix unblocker, but beware: TapVPN's privacy policy is a data-collecting nightmare.

TapVPN is a popular VPN app for Android that offers a free plan which gives you 6GB of traffic a month, and enables access to eight locations covering North America, Europe, Singapore and Bangalore.

Allow TapVPN to have access to your device’s idle resources (don't ask us what it'll do with them) and you're able to use nine premium servers. These cover a similar mix of locations, although a Sydney server is also included.

The free version is stuffed with ads which pop up on connect actions, disconnects and just when they feel like it, apparently; you know how it works.

That’s the price you pay for a free app, and if this all gets too painful, you can upgrade to an ad-free unlimited bandwidth plan for £3.89 ($5.45) a month. We've seen worse, but for comparison, Private Internet Access can charge you as little as $2.91 (£2.08) a month if you pay for two years upfront, and that will get you a far more powerful product which you can install on up to five of your devices.

Unusually for an Android VPN app, TapVPN has a website and a privacy policy. We pointed our browser in its general direction, and immediately spotted the lengthy list of personal information TapVPN might collect. Here it is, in full and unedited form:

TapVPN also points out that if you sign in using a third-party account – Microsoft, Facebook, Google, and so forth – it may also be able to collect your account data, text, archives, photos, bookmarks, info of your contacts and their common contacts, login data and profile information such as ‘about me’, ‘friend lists’ and ‘interests’.

Allowing TapVPN to use your device’s idle time will give it access to 'a part of your Internet, network connection and computer resources', mostly using Wi-Fi but perhaps also 'very limited cellular data'. What's it doing? We've no idea and TapVPN isn't saying, but if your device is regularly exchanging data with something else then there's at least some scope for logging.

We would normally be more concerned about logging of our VPN activity, but TapVPN doesn't say anything about this at all. It's probably safest to assume that your browsing is being logged at some level, even if only via session data (connect and disconnect times, incoming and outgoing IP addresses.)

Over time TapVPN could build up a substantial amount of data about you, and you shouldn't rely on the company to keep this private. The small print says it may be disclosed 'when commanded under applicable law', 'to encounter any actions that... constitute a contingency or liability for us', 'in response to a valid request or subpoena from a government or law enforcement agency', 'to defend the property, rights and integrity of any of our users, advertisers or licensors' and 'to process, manage and oversee legal claims and processes brought against us by third parties (e.g. takedown notices).'

Finally, we moved on from the contracts to check out TapVPN's permissions. Unfortunately, they were no more reassuring, with the app requiring access to: In-app purchases; Device & app history; Identity; Location; Photos/Media/Files; Device ID and call information. That's far more than is necessary for a VPN, and gives the app huge scope to access your personal information.

The TapVPN app has a simple and straightforward interface. There's a list of servers to choose from, a Connect/Disconnect switch, a status panel which shows the bandwidth you've used and your upload and download speeds, and that's about it.

Browsing the server list, we noticed the locations were displayed in an odd order. It makes sense (at least to us) to sort them alphabetically and/or grouped by country, but for some reason TapVPN doesn't completely follow either rule.

The servers do at least display a ping time to help you find the fastest location, but there are no other related goodies: no favorites system, no configurable default servers for different situations, nothing even faintly advanced.

It's much the same story with the app's settings: there are barely any at all. That's great if you're looking for simplicity, but experienced users could be frustrated at the lack of control.

On our first connect, the app asked if it could use our device idle resources, promising access to high-speed servers in return. We're unsure whether that's really a good idea, but hey, this is what we're paid to do, so we clicked Yes.

TapVPN's site unblocking abilities weren't bad at all. Netflix wasn't available from the New York server, but connecting via Dallas got us in. YouTube was accessible from both servers, and we were able to stream BBC iPlayer while connected to the London server.

Speeds were less impressive. Our test phone managed 28Mbps download speeds in our review environment, but this dropped to 12Mbps when connected to London. We got 7Mbps from Amsterdam, 4-5Mbps via New York and 2-3Mbps when going long-distance via Australia. We've seen worse, and even these speeds are enough for most tasks, but it's not the 'superfast' connection promised on Google Play.

We withdrew our permission for TapVPN to use our device resources and repeated our speed tests with the regular, not-at-all premium servers. These were slower, but still usable, at for example around 8Mbps for London and 3-4Mbps via New York.

As we used the app, it displayed full-screen ads on launch, when we connected and disconnected, and apparently on a timer. These can sometimes be closed like other windows, but others have a separate Close button, and sometimes you must wait a few seconds before these will work. This is annoying, but it's better than some apps we've seen – there are no popup ads, and no autoplay videos – and if you've learned to live with ad-sponsored software elsewhere, this product won't be an issue.

Finally, we ran leak tests across TapVPN's various servers. They seemed to be hosted by cloud computing giant DigitalOcean, which suggests to us they're likely to be reliable. All servers were in the locations TapVPN promised, and the app shielded our identity by correctly blocking all WebRTC and DNS leaks.

TapVPN could be useful as an easy way to unblock Netflix, but its data collection policies make us nervous and we wouldn't use the service for anything where privacy is important.