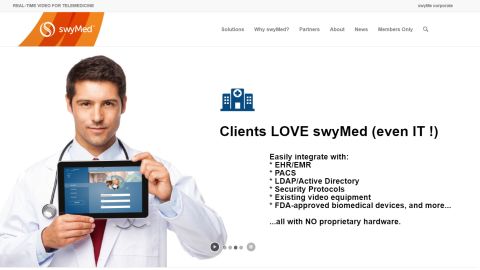 Unlike most of the other telemedicine providers that focus only on the healthcare market, swyMed is a brand of swyMe, a more general provider of software based video conferencing. While swyMe has done many partnerships to provide video collaboration through the years, now the focus has shifted towards cloud based video collaboration as swyMed for their telemedicine solution, and swyMeet as its telebusiness solution.

swyMed grew out of technology from an Italian software house. The difficulty was to transmit Italian newspapers to athletes at the 1996 Olympic Games, a challenge at the time for data transfer over satellite. swyMed was subsequently awarded two patents for this technology that grew, and was subsequently put into a commercial package for a video communication platform.

Today, about half of its users are in the US, and it gets used worldwide across four continents. swyMed technology was deployed at the University of Texas- Houston, for the United States’ first mobile telestroke unit.

swyMed is designed to help with the shortage of doctors, especially specialists, for rural healthcare needs. Through use of remote consultations, hospitals in less populated areas can fill in their staffing needs, while meeting standards. Also, these specialists can increase their productivity by appearing in a click, and avoiding burdensome, and time wasting travel between facilities separated by geography.

swyMed gets run through the cloud to provide its encrypted end-to-end communication service. A frequent weakness of such an approach is the ability to connect gets compromised when the servers are in disparate geographic areas, increasing the travel time of data between the clients and the cloud server. swyMed addresses this concern with a large number of servers, spread worldwide across the continents, run by Microsoft Azure. This is done to provide high reliability, constant availability, with backups, and redundancy. These servers are also certified by HiTrust, ISO, PCI, SOC I-III, among others. Furthermore, each swyMed server gets run in its own secure container, and furthermore, each client accesses its own secure, private domain. swyMed claims that their cloud is quite robust, with scalability, to the point that it accomplished a 1,300 endpoint call!

For those users that prefer to run their own servers (either physical or virtual), and not use the swyMed ones in the cloud, swyMed offers another option. This is a swyMed On-premise deployment that can leverage existing IT resources to manage the servers in house.

Privacy is also an integral part of each video session, which gets encrypted to AES 256 bit, high enough for ‘Top Secret’ governmental communications. Also, no server session data is stored beyond what is needed for an audit download, so the minimum is kept, such as the user accounts connected, the length of time connected, and the number of interactions.

Video connections when mobile are a challenge, as anyone who has tried to Facetime when riding in a car can attest to. swyMed has optimized their technology to be able to perform while mobile, even on lower bandwidth connections, such as 60 kbps to 4 Mbps.

Given swyMed’s longstanding presence in the healthcare segment, with its popularity of thousands of users daily, it is somewhat surprising that there is such a paucity of user reviews. Put more bluntly, we could not find any- despite going several pages deep in search engine results. Perhaps that is not as surprising considering that this is more of an enterprise product, but about the best we can say from a user perspective is that at least it does receive 61 likes on its Facebook page, and did we see anything negative posted there.

swyMed offers a number of options to receive support with their product. The first is a toll free number, except it is limited to “Eastern Time business hours,” which we would have appreciated having more specific hours of operation. There is also an option to email a dedicated support email address, but there are no particulars provided on the hours, or if available on the weekends to receive a response.

Finally, there is the option to start a trouble ticket via an online portal, and this gives the option to attach up to five files, useful often for annotated screenshots for more complex issues to explain the issue the user is experiencing. The swyMed site also indicates that your technician may request that you share your client with him, which can then allow the technician to virtually see exactly how your client is performing.

The price for swyMed is not anywhere on their website. Also, despite some search engine queries, the pricing data is not available anywhere that we found, and is kept quite hidden. Furthermore, it would appear, as seen in the screenshot above, that the only way to connect with swyMed is via telephone, either directly, or via an online information request where you provide your information, and then the company calls you back.

As you might guess by now, we would prefer some more upfront pricing info, and also some more options to obtain the info, that require less time investment than sitting on the phone, such as a chatbot, or an email exchange.

swyMed is an enterprise quality telemedicine solution. We find significant highpoints in their mobile videoconferencing technology, the robust Microsoft Azure power cloud network, and the assurances for high level encryption and privacy. Shortcomings include the lack of user reviews, the unclear hours and days for support, and the frustratingly opaque pricing. On balance, for larger facilities looking for a top quality video conferencing solution, swyMed has the technology to support them, and we appreciate the flexibility offered with on-premise or cloud deployments.