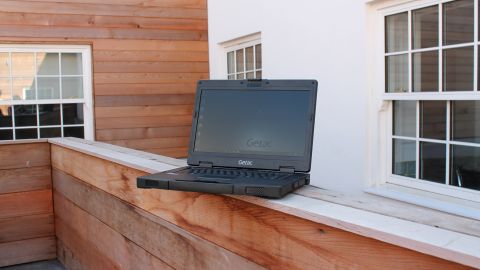 Getac's redesigned S410 could be a formidable outdoor device configured to the hilt, but the entry-level version fails to impressive on account of its low-resolution washed out display and lacklustre power.

If there was a fashion competition for laptops, the Getac S410 wouldn't win it. And that's fine, because this chunky system is a semi-rugged model designed to be used by field operatives based out in the great outdoors who need a device that's reliable, solid and won't weigh them down. Too much, anyway.

People who might use one include the police, professional services, vehicle operators and professionals who work in public safety and manufacturing. Where rugged tablets like the Panasonic CF-20 make more sense when portability is paramount and the device has to be held with one hand, the S410 offers a more traditional laptop experience with a full-sized keyboard and 14-inch display.

In terms of design, the S410 resembles a laptop you might have bought in 2002. To call it chunky would be something of an understatement, its thickness wading in at a substantial 1.4 inches (around 35mm). Still, that's an improvement on the previous model, the Getac S400, which measured 1.93 inches (around 48mm) thick - so Getac is moving things in the right direction with this brand-new design.

All of that chunk lends the S410 a reassuringly solid feel in the hand. It's near impossible to detect any flex in the device's body, except for the keyboard part - and even then you have to press down really hard to get the plastic to bend. The solid chassis is what sets the S410 apart from regular laptops and quite literally forms the bulk of the laptop's basic cost. It starts at £1,149 (around US$1,518 or AUS$1,990) and rises north of that sharply as the specs increase.

Compared to other rugged devices like the aforementioned Panasonic ToughBook CF-20. the Getac's display is a let down. It's 14-inches in size, but the pixel-resolution is a meager 1,366 x 768. Forgetting sharpness for a second, this provides a distinct lack of screen real-estate and pinning two apps side-by-side is a compromised experience. There's no issue with using one app at a time in full-screen, but multi-tasking is frustrating at best.

The display is also difficult to see outdoors due to lackluster brightness. The S410 can be configured with Getac's 1000-nits Lumibond display with sunlight readable technology, but we can only assume that it was missing on our review sample as it barely looked like it was reaching 400 nits to our eyes. Colours appear washed out and lifeless, and viewing angles are poor due to the TFT panel used.

The S410's keyboard posses no challenges to typing, with decent sized keys - even if they're not particularly satisfying to type on and sound cheap under the fingers. Getac has done a better job with the trackpad and its accompanying buttons, which despite being small are responsive. Unfortunately there's no touch operation here, so forget using a digitizer or your fingers.

You can, of course, hook up a mouse to the machine into one of the ports. Connectivity options include four USB ports, Wi-Fi (802.11c), audio, VGA, HDMI and an SD-Slot.

Getac has outfitted the S410 with Intel's ultra-low voltage Core i5-6200U processor clocked at 2.3GHz (Turbo Boost to 2.4GHz), backed up by an insubstantial 4GB of main memory. There was no dedicated graphics option to speak of in our review sample, with the processor's integrated HD Graphics 520 taking on graphics duties alone.

The S410 produced fairly low benchmark results, and while the system was nippy enough most of the time with apps loading instantly, it did produce occasional moments of lag when performing tasks such as opening the Settings or Action Center panel. You won't have any problem running legacy apps on this machine, but the S410 would struggle under more CPU-intensive scenarios.

Even battery life isn't particularly up to scratch, despite the low-resolution display, with the S410 reaching a barely acceptable 5 hours and 24 minutes away from the plug socket. That's fine for, say, an Asus UX305 ultrabook, but the Getac is designed to be used away from a plug socket for hours on end.

Also, the test was conducted with the screen's brightness set to 50%, which rendered it nearly impossible to see outdoors in bright sunlight. Even though you would eke out a few more hours of battery, it would be at the expense of actually being able to do any work on the display.

It feels like the entry-level version of the Getac S410 has potential, but the unit we received to test was way too compromised to recommend. Its design, although chunky, is a clear improvement on the S400 and houses a comfortable keyboard, practical carry handle and a healthy selection of ports. However, the machine's display, average-strength processor and low amount of main memory render it unsuitable for working out in the field. When that's the primary objective of the device, that's not particularly heartening.