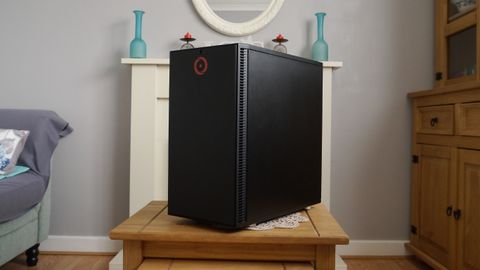 An excellent workstation PC which crams in some powerful components at a relatively reasonable price.

Ask a room full of engineers, city analysts or designers whether they have ever heard of a computer company called Origin and the answer is likely to be no. However, conduct a similar quick show of hands when it comes to those using a workstation PC – of either the desktop or notebook variety – and the overwhelming majority are likely to say yes.

That’s the challenge (and opportunity) that US-based gaming and professional computer builder, Origin PC, faces. And with the Origin M-X99 M-class, the firm has a chance of making a great lasting impression with a product that delivers the sort of punch that can usually only be found from tier-1 manufacturers (think Dell, Lenovo or HP).

Origin PC has three workstation tiers (S-class, M-class and L-class which stands for small, medium and large respectively) with corresponding price points. We got hold of the M-class with the Fractal Define Mini C case (the other option being the Phantek Evolv).

The model sent to us is available directly from Origin for as little as $5,399 (around £4,170) with an estimated shipping time of 10 business days. Note that while the price includes shipping and a lifetime warranty, that’s only valid for the mainland US.

[Ed: Note that since this review was written, Origin has tweaked its line-up to include Kaby Lake Core i7-7700K (so no Extreme Edition) and Skylake Xeon products. For the former, the ASRock Z270M Extreme4 is now the default motherboard. The new models support three drives and Intel’s Optane technology, but there is currently no replacement for the i7-6950X. The i9-9700X should be available later this year.]

As you might expect, the company specialises in assembling carefully selected off-the-shelf components to improve its competitiveness. As mentioned, Origin chose the Define Mini C case (with a plastic window) from Fractal Design, which includes two 120mm pre-installed fans (great for keeping components cooled at low RPMs).

It also comes with industrial-grade sound dampening material (side and front), a concealed power supply cage, bottom/front fan filters, a removable top grill and the ability to house up to five PCI expansion cards.

Since it is a mini-tower chassis, it can only cater for a micro-ATX motherboard, and there are no external bays so you will have to use an external optical drive should you want to read or burn DVDs. Speaking of storage, this case can accommodate two hard disk drives and up to three SSDs.

As expected, the Fractal Define Mini C is a tool-less case and the front facia is fixed (with a subtle Origin logo). Along the top edge of the PC you’ll find the power button along with the reboot switch, two full-size USB 3.0 ports and two audio connectors.

That Broadwell-E CPU, which is one of the most expensive consumer processors on the market, comes with 10-cores, 20-threads, 25MB cache and has a TDP of 140W.

The most impressive and expensive component, however, is a single 16GB Nvidia Quadro P5000 – a 24GB P6000 or a 16GB GP100 are also available as options, with the flexibility of adding a second card if needs be.

Four memory slots are filled with Kingston’s 16GB HyperX 2666MHz memory modules (so that’s 64GB in all), with a single 512GB Samsung 960 Pro M.2 NVMe SSD and an 8TB Seagate hard disk drive as backup. Origin missed a trick here by not allowing users to configure two SSDs in RAID with a backup drive.

Note that you don’t get a keyboard or a mouse with your system, but you do get Windows 10 Pro by default – and it’s possible to get a significant discount if you elect to have no operating system.

One highlight worth mentioning, and something very different to what the competition offers, is the fact that the workstation arrived in a wooden crate; a nice touch.

The M-X99 M-class is a superb piece of kit: a workstation that manages to provide quality components at a relatively reasonable price.

Origin PC has managed to carve a lucrative niche in the workstation market by offering a wider hardware range to attract an audience that overlaps with gamers, and folks who are likely to give ‘challenger’ companies a whirl rather than just sticking to the big gun PC vendors.

The Broadwell-E CPU that powers the M-X99 is likely to be superseded very soon by Kaby Lake processors which will, on paper, offer better performance with a lower TDP – which in turn would allow for a higher overclock.

Keep an eye on regular promotions carried out by Origin. At the time of writing, they had a ‘Dads and Grads’ promo where buyers can choose between a free $50 (around £40) Amazon voucher or a free Samsung 250GB SSD.