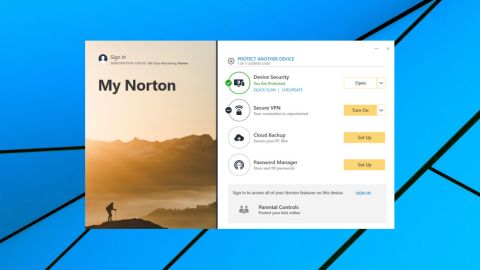 One of the most comprehensive security suites around, with no major weak spots, Norton 360 is a powerful set of tools which will keep you safe just about anywhere.

Norton 360 is a powerful range of feature-packed and very comprehensive security suites.

Norton 360 Deluxe, the subject of this review, adds parental controls, lifts your online backup storage to 50GB, and can be used on up to five devices (with any mix of platforms). It's priced at $59.99 for year one, $99.99 on renewal.

Norton 360 with LifeLock Select adds a full identity theft service for US users. This raises an alert if it spots your data being used, has a specialist team to help restore your identity if you're affected, includes credit monitoring, social security number and credit alert, and even has an insurance element to cover you for expenses, money stolen, lawyer's fees and more (as usual, exclusions apply – read the small print if this is important to you). It's priced at $99.99 for year one, $149.99 on renewal.

This looks like good value to us, and beats the competition in some areas. Bitdefender's Total Security 2020 also covers up to 5 devices, for instance, and costs a very similar $49.99 for year one, $89.99 afterwards. But it doesn't include online backup and its VPN limits users to a feeble 200MB a day. Adding unrestricted VPN use lifts the total to $89.98 initially, $139.98 on renewal.

The Norton 360 installer is smart and flexible. It didn't just detect the Avira and Bitdefender files on our system, for example, it also allowed us to decide whether we kept or removed them. (Although it's best not to run two antivirus packages simultaneously, this won't necessarily cause problems, and we prefer software that leaves us to decide what we want to do.)

Some security layers aren't fully set up to use all Norton 360's features, and this might also cause some uncertainty. The Internet Security module was marked as not configured when we first launched the suite, for instance, but this was only a gentle prompt for us to install the password manager and Norton's various browser extensions (Safe Search, Search Web, Home Page). That left us with a little more work to do, but if you don't want to use Norton Safe Search as your search provider, for instance, you'll probably be happy that it's not installed by default.

With so many features, it can also take a while to find what you need. If there's an apparent network issue, for instance, you might want to check the firewall – but where is it? You might click through a few tabs before you realize it's tucked away in the Security Settings dialog.

The interface really isn't difficult to follow, though, and after half an hour of exploring the various sections, you'll have a good understanding of Norton 360's abilities.

If you do get stuck, Norton 360's built-in help is on hand, and it's much more effective than you might expect.

To find the firewall, for example, press Ctrl+F from the Security window, type Firewall in the search box, and a list of firewall panels and functions appears. These are links to those areas of the programs, not text pages; choose the 'Firewall Network and Connections' option and that panel pops up, ready for use.

Norton 360 supports all the basic scan types, and enables launching a quick scan at a click, running custom scans on particular files or folders, or checking your entire system.

Norton Power Insight comes with the package, and is a more aggressive but very capable way of removing stubborn threats.

Norton 360 doesn't include Symantec's Bootable Recovery Tool, which allows booting and scanning systems from a USB key. The help explains how you can download and use it, so this isn't a big deal, but it means the feature isn't obvious to newbies. Life would be easier if the interface highlighted it somewhere, even just as a link to the Bootable Recovery Tool web page.

Initial scan times didn't impress, with Norton 360 taking 15%-20% longer than Bitdefender or Avira to scan our test data. But smart optimization ensures the package only scans unchanged files, and by the second run, it rushed through more than 250,000 files in just 85 seconds.

Scans are hugely configurable, with an array of settings covering which files to check, how to check them and what to do afterwards. They're well-presented and easier to understand than some of the competition (Avast, Avira), but finding them can be a hassle.

Under Settings you'll find a panel to configure how the Full System scan works, and schedule it, for instance, but you won't find any mention of that on the Scans screen, or the Advanced Settings page. You'll have to know it's there, or go exploring all the options, to realize it's a possibility.

Still, this does at least keep the system easy to use, and overall Norton's antivirus engine performs very well.

Norton 360's Firewall is a highlight of the suite, an ultra-intelligent module which detects and blocks all kinds of network attacks, including many common Wi-Fi tricks (SSL man in the middle, SSL trip attacks, ARP and DNS spoofing, and more).

It's smart enough to handle most situations on its own, and many users may never even realize it's there. But if you know what you're doing, heading off to its Settings panel gives you vast control over every aspect of the firewall's operations.

Norton's internet protection uses its vast database of malicious websites and files to keep you safe from harm. In our experience it does an excellent job of keeping you away from malware, reducing the chance of infection later.

Norton VPN is a simple VPN which gives you access to servers in 30 countries across the world. It has no 'per day' or 'per month' data limits – you can use it as much as you like.

As VPNs go, it's basic, with no significant features or settings, and no extras beyond simple tracker blocking.

Performance is generally good, though, especially when you consider what you're paying. ExpressVPN is a much better VPN, but it costs $99.95 a year. Norton 360 Deluxe gives you a very complete security suite as well, but still only costs $59.99 for year one, $99.99 on renewal.

Norton's Cloud Backup tool provides a quick and easy way to protect key files. You're able to create multiple backup sets, specify source folders and/or file types, schedule backups or run them on demand. Despite the name, you can also back up files locally, which is handy if you sometimes need more than Norton 360 Deluxe's 50GB allowance.

There's nothing here you won't have seen before, but we did spot a few neat touches, including the ability to add files and folders to a backup from the Explorer right-click menu. Overall it's a decent tool, effective and easy to use.

Norton Password Manager (the product formerly known as Norton Identity Safe) is a capable system which allows you to save passwords and personal data, automatically enter them at websites, and sync logins across your devices.

We've had technical issues with Identity Safe before, but this isn't just a name change – Symantec has done some major work on the product. New features include a secure password generator, and the ability to unlock your vault via a notification on your mobile device. You also get simple highlighting of the health and safety of all your passwords, plus automatic changing of passwords for some websites, without having to leave the app (Amazon, BBC, Dropbox, eBay, Facebook, Google, IMDB, Microsoft, Netflix, Reddit, more). Not to mention the option to import passwords from Dashlane, LastPass and 1Password.

The Spam filter looks much more impressive, at least in our very limited test. It blocked 87.5% of spam without falsely flagging a single legitimate email, comparable to the results we'd expect from a specialist antispam product.

There's a small trade-off in performance, as by default the filter queries Norton's servers to get a verdict on some messages, slightly extending the time it takes to receive mail. This was only a few seconds at most for us, though, and you can turn off web queries if it becomes an issue (though accuracy might fall).

Norton's SafeCam aims to prevent untrusted apps from accessing your webcam, but without hassling you with 'Is this okay, yes/no?' alerts. Known safe files are allowed access automatically, known dangerous files are blocked, and a desktop notification keeps you in touch with what's happening (if something's just made a connection, you'll be told).

Last, but by no means least, an excellent Parental Controls system enables controlling your kids' internet access by content and time. It also monitors search and social network use, prevents sharing sensitive performance information, and more (the precise features you'll get vary according to platform). We can't begin to do it justice here – there's more than enough to justify a full review, all on its own – but if you're interested, Norton's website has more information on the basics.

Norton's engine typically doesn't get top ratings from the independent testing labs, and the most recent results show this hasn't changed.

AV-Comparatives' Real-World Protection Test is an intensive benchmark which gauges top antivirus engines against the most dangerous threats around. The Feb-May 2019 summary report placed Symantec in a mid-range 8th out of 16, with a protection rate of 99.6% and a relatively high 21 false positives (nine of the test products had five or less). This isn't bad – Trend Micro, Panda, Avast and AVG all lagged behind – but it can't match Kaspersky's 100% protection rate and zero false positives.

But there was better news in AV-Test's May-June Windows 10 tests, where Symantec scored a perfect 100% protection, and achieved top marks in the performance and usability tests.

To round off the review, we launched our own custom ransomware simulator. This is very simple, but as it's not been publicly released, Norton shouldn't be able to detect the threat from its file signature alone. Would its behavior monitoring stop what we were doing?

We launched the threat, and – nothing seemed to happen. Our test files weren't encrypted, but there was no pop-up warning, either.

We ran our simulator again: still nothing. Had our test threat failed?

Well, no. Norton had detected and stopped our simulator before it could encrypt a test file and uploaded it for analysis. A couple of minutes later, an alert told us it had been behaving suspiciously, but was now quarantined. The engine had eliminated our test malware without us losing any data, a great performance.

Norton 360 Deluxe doesn't have leading-edge malware detection rates, but it's good, and what won us over here was the sheer weight and quality of its tools. The firewall, VPN, parental controls and spam filter are all worth paying for as individual products, and the password manager and cloud backup are worth having, too.