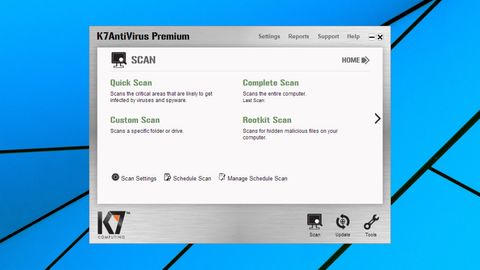 K7 offers some powerful extras, but the core antivirus protection is weak, which obviously lets the package down.

K7 Computing may not have the profile of the big-name competition, but there's more to the Indian company than you might think: 25+ years of antivirus experience, VirusTotal and OPSWAT partners, a range of home and business products, and more than 20 million users around the world.

There's also a notable omission, though, in the lack of any URL filtering. Many antivirus packages will try to detect and block access to malicious or phishing websites, but not this one.

Single user pricing is good, with the package costing a mere $25 for a one device, one-year license. Kaspersky Anti-Virus doesn't have all the functionality of K7 Antivirus Premium, but it's noticeably more expensive at $32.50 (£25).

Add users and years and it's a little different. A five device, two-year license for K7 Antivirus Premium is $100; an equivalent Kaspersky license is a near identical $104 (£80). K7 still looks like good value for the features you get, but the price advantages fade if you opt for a multi-user license.

If you're intrigued by the lengthy feature list and low price, a free 30-day trial gives you a risk-free way to find out more.

The K7 Antivirus Premium installer looked very simple, just a 'View EULA' link and an 'Install' button, with not as much as a 'choose your installation folder' option to get in the way. So, we tapped Install and watched as the setup window disappeared, and - didn't return. No 'Done' message, no 'Please reboot' advice, nothing at all.

Task Manager didn't show any running installer, but the process didn't seem to have finished properly, either (there was no K7 shortcut on our desktop, nothing on the Start menu, no K7 icon in our system tray.)

We rebooted, and a K7 icon appeared in our system tray. Unfortunately, it wouldn't respond to our left or right-clicks, just displaying a tooltip of 'Activation Pending.' After a few minutes, pop-ups asked us if we wanted to activate and update the package, but when we clicked 'yes please', warned us that the update had failed, and we should reinstall.

While this sounds easy, it really wasn't. Just as had happened in our last K7 review (though for different reasons), our first installation was broken. When we ran the installer again, it told us K7 Antivirus Premium was installed already and we should uninstall it; when we tried to run the uninstaller, it told us the process had failed and we should reinstall. Deadlock.

We went to work, finding and running K7's cleanup tool ourselves, cleaning our temporary folders, rebooting, closing all non-essential apps, trying K7's installer again, and - this time, we appeared to be in luck. We were prompted to enter our name and email address, and were told it was 'activating the product.'

Ten minutes later, when the 'activating...' message still hadn't gone away, we realized there was another problem, so closed the window and rebooted. This time, the K7 console refused to launch at all, telling us it couldn't find 'libcef.dll' (part of Chromium's Embedded Framework), and suggesting we reinstall.

So, we retraced our steps, uninstalled manually, re-ran the cleanup tool, wiped all our temporary files, rebooted, reinstalled, clicked Activate, provided our name, and this time, finally, were told activation was successful.

Checking out the K7 Computing folder revealed a relatively small installation, a little under 400MB. Most executable files were K7's own code, though we noticed a few relating to Chromium and Java.

It's important that any antivirus can protect itself from malware, and right now K7 Antivirus Premium does this very well. We found processes and services were shielded from attack, files not easily deleted, and it seems malware won't have any quick way to disable K7's protection.

K7 Antivirus Premium has an unusual interface which focuses more on your protection status than anything else. A large panel highlights details like the last update time, virus definition version and how long might be left on your subscription. The few action buttons – Scan, Tools, Settings – are tucked away at the edge of the window.

The program offers what looks like a familiar set of scan types in Quick, Complete, Custom and Rootkit, but this doesn't tell the whole story. When we ran a Quick Scan, it finished in a fraction of a second, apparently because it checked only 201 files. Other packages might take two, three, four or more minutes, but they're also considerably more thorough, covering running processes, loaded modules, startup programs, maybe system folders, installed applications and more.

The problem with this feeble Quick Scan is you're left with few other options. The Complete Scan might take too long if you've lots of data, and the Custom Scan isn't very configurable. You can specify one or more folders, but it won't remember those choices for next time, and you can't include other system areas (running processes, the Registry). As a result, you're usually left to either scan not enough files, or far too many.

Real-world scanning speeds were slower than usual, and detection rates were average at best. When we turned on spyware detection, K7 Antivirus Premium also picked up many files we would consider to be safe. A ‘clean automatically’ default setting means you don't get to decide how they're treated, either: the program removes them to Quarantine without further prompting, unless you turn the feature off.

K7 Antivirus includes a reasonably intelligent firewall. It sets up sensible automatic rules itself, so you're not hassled with endless "can process X go online?" queries, but experts can also add and edit custom rules as required.

K7 Antivirus Premium is unusual in having a device control system. You're able to disable USB, CD or DVD drives, for instance. It’s also possible to add password protection, prevent programs launching from those devices, or stop users copying files to them.

A Tools tab bundles some much smaller functions. USB vaccination is probably the highlight, reducing the chance of a USB key becoming infected by autorun malware. A simple virtual keyboard might protect against keyloggers, and there are extremely basic cleaners for Windows and browser temporary files.

Browsing the Settings dialog reveals other interesting technologies and options, many not enabled by default. There's an Office plugin to scan all Word/Excel files opened by Office, for instance. We would expect those files to have been scanned already, but maybe checking them within Office brings some benefits. If you're interested, the plugin can be installed with a click.

We run simple detection tests on every antivirus we review, but these only give a general idea of what a package can do. To fully understand the big picture, we also check product ratings with the major independent testing labs.

AV-Comparatives' Real-World Protection Test measures the performance of eighteen top antivirus engines against the latest threats. The July-November 2018 report takes an average of 5 tests, and it placed K7 in 11th place. While that's a little disappointing, it's not a disaster, and shows K7 delivers similar results to several other big-name antivirus vendors. K7 Antivirus Premium ranked only marginally behind McAfee and Symantec, for instance, and it outperformed Panda, ESET, Emsisoft and BullGuard.

AV-Test's October 2018 Windows Home User report found K7 Total Security blocked 100% of known threats, but was marginally below average at protecting against 0-day attacks. The end result was a broad agreement with AV-Comparatives, as both labs placed K7 in the lower half of their rankings.

Could the company regain some credit by detecting and blocking our custom ransomware simulator, a threat it had never seen before? Nope: we launched the simulator, and K7 just looked on as it encrypted thousands of documents.

There was some good news in AV-Test and AV-Comparatives' performance tests, which measure the impact of security software on your system's speed. K7 has had some performance issues in the past, but not any more, it seems. AV-Test's April and October 2018 performance tests placed K7 in first and second place out of 18 contenders, effortlessly outperforming the competition.

K7 Antivirus Premium has some powerful extras – namely device control, and a smart firewall – but the core antivirus engine just isn't as accurate or reliable as it needs to be. Throw in the installation issues and lack of URL filtering and it's not a package we can recommend.