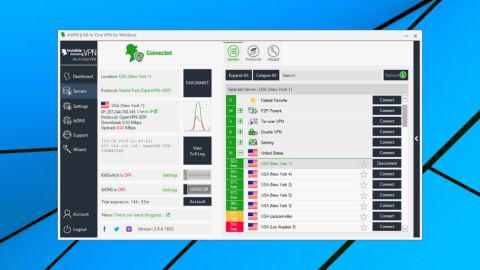 The Ultimate plan offers a stack of advanced features, but clients can be awkward to use, and we found speeds were poor over long distances. Test carefully before you buy.

The service has a capable network of servers spread over 49 countries (some supporting P2P), more than you'll see with many providers.

A wide range of apps covers you on Windows, Mac, iOS and Android. Chrome, Opera and Firefox extensions are available, you can manually set up the service on other platforms, and there's support for connecting up to five devices simultaneously.

IbVPN can handle a host of connection technologies, from standard protocols such as L2TP and OpenVPN, to stealth technologies which might help you bypass VPN blocking (ObfsProxy), to proxy and proxy variations (Shadowsocks, Socks5), TOR over VPN, Double VPN (pass traffic through two VPN servers), SmartDNS for website unblocking, and more.

And of course, there's plenty more, from a no-logs promise to 24/7 support, and even an option for remote assistance.

IbVPN's pricing scheme looks complicated, with four plans available, each one aimed at very different audiences. But browse the details and we think only one of these deserves real attention.

The Torrent VPN plan gets you P2P and Socks5 support, for instance, but restricts your locations. The SmartDNS plan doesn't have P2P, but gives you SmartDNS to help unblock restricted websites. A Standard VPN plan offers more locations, but doesn't support P2P. These look like reasonable value at $4.95 billed monthly, or $3.08 on the annual plan, but they only support a single connection. You won't be able to use the service on your laptop, if you're already using it on your phone.

IbVPN's high-end Ultimate VPN plan gives you all the features we've described, making it a much better choice for most people. There's access to all the locations, P2P is available, you get SmartDNS for website unblocking, and all the company's more advanced features (TOR over VPN, Double VPN, more.) It's also more expensive at $10.95 billed monthly, $4.84 on the annual plan, but these are still competitive prices, and appear to be good value for the features you're getting.

If you're intrigued, a 24-hour Ultimate VPN trial enables checking out how the service works for you. And if you decide to sign up, you're able to pay via cards, PayPal, Bitcoin and a host of other payment types.

IbVPN's privacy policy is a well-designed document which ditches the usual legal jargon, replacing it with short, clear paragraphs which you might actually want to read.

Arguably, the document is a little too short. This is the entire logging policy, for instance:

"ibVPN does not collect or log any traffic or use of its Virtual Private Network service.

We cannot relate any specific activity with any specific user. If any legal notices are forwarded to our legal department we will comply with that notice. However, we cannot be compelled to hand over information which we do not have."

We have some questions about that. Does a commitment not to log the 'use' of the VPN rule out any form of session logging, for instance, such as recording connect and disconnect times, bandwidth use, incoming and outgoing IP addresses? We're not completely sure, which is why it's better for privacy policies to specifically rule out various logging types. Still, the statement does cover a couple of key points, and that's more than some providers manage with hundreds more words.

IbVPN gives you just a 24-hour trial, as mentioned, but it's unrestricted and doesn't require any credit card details. Just enter your name, email address and a password and your new account should be activated within 10 minutes.

We signed up and the website presented us with a lengthy list of downloads. IbVPN has clients for Windows, Mac, iOS and Android, as well as simple extensions for Chrome, Firefox and Opera. There are also guides on setting up proxies, SmartDNS and more.

We grabbed a copy of the latest Windows client. The installer downloaded quickly, and set itself up with no hassles or complications.

The Windows client opens with a surprisingly cluttered dashboard. The Servers tab, for instance, has connection status information, buttons to view the log, enable or disable the kill switch or ibVPN's DNS, even pointless company-related information (links to the News page and social media), but doesn't initially list any servers. The client displays these in a separate panel with three tabs: one for servers, one for protocols, and another for a Connection wizard.

Even the server list is more complex than usual. This has server categories at the top (Fastest, P2P, Gaming, Tor over VPN, Double VPN), then lists countries, but not in alphabetical order (Italy, Canada, Germany, Spain and so on.) There is genuine power here - so for example you can view the servers within a country and see their current load, then mark commonly used servers as Favorites - but it takes some time and effort to find your way around.

A Connection Wizard could be a smarter choice for the beginner. Select the option that most represents what you need (speed, UK streaming, US streaming, P2P support, to get online in China) and the client will connect you to the best server in a couple of clicks. This is a good idea, but ibVPN still makes it more difficult than it used to be. Previous CyberGhost clients have done something similar by displaying colored tiles with two or three words describing their purpose; this client uses lengthy captions and some technical jargon.

A Rotating Favorites scheme can change your location from one favorite to the next every few minutes.

There are two kill switches to help you control what happens if the connection drops. A standard system-level switch blocks all internet traffic, or you can opt to close specific applications, and even restore them when the VPN reconnects.

There are two layers of DNS protection, and an option to disable IPv6 traffic.

The client is exceptionally configurable. You're able to decide when it launches, whether it reconnects immediately, how its window is displayed, whether you see notifications, or the client asks you for confirmation about various actions. For example, initially you get an "are you sure?" message whenever you change locations, but if that gets annoying you can turn it off with a click.

If you're mostly looking for point-and-click simplicity, then none of this will matter much, and ibVPN's Windows client will feel like an overcomplicated mess.

But if you'll use the client's more advanced features, you might feel able to forgive its various interface issues. It's definitely worth a closer look.

The ibVPN client handled its core operations well during our tests. It connected to servers quickly, and used desktop notifications to tell us exactly when we were protected, and when the connection closed. Checking with ipleak.net, doileak.com and other privacy sites showed no signs of any DNS leaks. And the kill switch worked as advertised, instantly blocking all internet access when we forcibly closed the connection, then automatically reconnecting within a few seconds.

We began our website unblocking tests by accessing BBC iPlayer from ibVPN's three UK streaming' servers. Two were blocked, but one allowed us to view content. That wasn't great, but it was better than US Netflix: the service was blocked on every server we tried.

Peak US speeds were near identical at an average 50Mbps. Even when we intentionally chose a US server with the heaviest load, the lowest speed we recorded was 39Mbps.

Long-distance connections were more of a problem. Australia managed a decent 22-25Mbps, New Zealand a usable 15Mbps, but many of the less common locations (Taiwan, Malaysia, Vietnam) struggled to reach 5Mbps. That's not unusual, but keep it in mind, and run frequent speed tests of your own during the 24-hour trial.

IbVPN's stack of features and configurable clients have a lot of appeal, especially for experienced users. It's not always easy to use and we found speeds could be poor over long distances, but it's worth taking the 24-hour trial for a spin, to see how the service works for you.