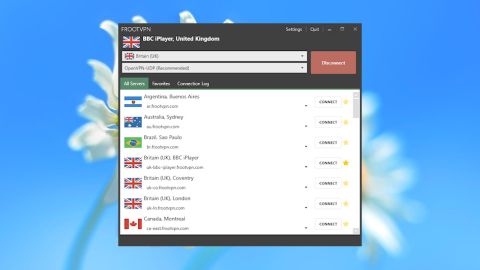 FrootVPN is a Swedish VPN provider which seems to offer a reasonable service for a very fair price.

The network is a decent size, for instance, with 48 locations including 7 in the US, many others in Europe and Asia, and less-common countries including Brazil, China, Costa Rica and Russia. P2P is supported everywhere.

FrootVPN only offers a Windows client - that's right, nothing for Mac, iOS or Android - but support for OpenVPN, IKEv2, L2TP and PPTP means you can manually set it up on almost anything else, and you're able to connect up to five devices at once.

The FrootVPN website says the service allows you to 'freely access websites like Netflix, Pandora Radio, Spotify, Hulu, and many more.' We never take these claims as guarantees - unblocking sites like Netflix is difficult, and even the best VPNs might fail occasionally - but it's still good to see providers make this kind of public commitment.

Monthly pricing is exceptionally low at just $4.99. Many providers charge at least twice that.

Pay quarterly and the cost drops to $3.99, while the annual plan is an effective $2.99. You can find cheaper deals from a few providers - CyberGhost, SurfShark, ZenMate - but usually only by signing up for two years or more, and overall, FrootVPN seems to offer very good value.

There's no trial, unfortunately, but you're protected by a 30-day money-back guarantee, at least in theory. The small print says the company only gives refunds "if the user had reasonable expectations on the service which Frootvpn.com was not able to fulfil", which suggests this is far from unconditional. You must have some kind of problem with the service, and convince FrootVPN that your issue is 'reasonable', before you'll get your money back.

We're not entirely happy with the refund policy, then, but FrootVPN scores for its support for a wide range of payment types, including card, PayPal, Perfect Money, Bitcoin and multiple other cryptocurrencies.

The FrootVPN website states upfront that there's "no logging of your activity". Sounds promising, although we wouldn't expect them to say anything else.

A 'No Logging' page gives a little more information: "We don't keep any logs of any kind such as User Info, Timestamps, Bandwidth, IP Address, DNS Queries and Log sessions on any of your activities..."

This seems to be implying that the company doesn't maintain any form of session data – connection times, bandwidth used, incoming or outgoing IP address – but it turned out not to be entirely true (we’ll discuss this more later in the review).

The privacy policy is too short to offer much help, with the 'What we collect' section using barely 250 words to cover the website, payments and VPN.

The terms and conditions are also very brief, essentially little more than 'don't use our service to do illegal stuff.'

As FrootVPN hasn't reported any kind of public audit on its systems (unlike VyprVPN, TunnelBear, NordVPN and others), there's no way for potential customers to know if it lives up to its promises, and potential customers must take what it says on trust.

Looking at who owns a VPN provider can sometimes offer clues. In this case, FrootVPN appears to be one of several VPN brands owned by Edelino Commerce, along with Anonine VPN, VPNTunnel, BoxPN and more. Sounds like Edelino might be some tech giant that automatically deserves extra trust, right?

Well, maybe not. When we visited the Edelino Commerce website, we found a single-page effort with minimal information, and so poorly set up that it doesn't even have a working https connection. Its certificate is for affiliate.vpnpartner.com, rather than edelinocommerce.com, which might reflect the main purpose of the company: to make money by encouraging others to market the VPNs.

We wondered if checking the Whois records for vpnpartner.com might tell us more about what was going on here, but no-- it's been registered using a privacy service, and there's no way to see who is behind it.

While none of this is even close to evidence that FrootVPN is doing anything dubious, it's not exactly transparent, either. When big-name competitors are now having public security and privacy audits, it's no longer enough for the rest of the industry to just say 'we don't log anything, no, really' and hope users will believe them.

Signing up with FrootVPN is simple and straightforward, with everything happening on the same page. Pick a plan, enter your email address and choose a payment method. You can even decide whether to enable a subscription (an automatic renewal) or just make a one-off payment, a welcome choice which you don't often see elsewhere.

We were interested to see a 'Usage information' chart, which plots your bandwidth use for the past six months. That might be handy for some people, but the real story is it tells us FrootVPN logs at least some information: bandwidth use by month. That means it is recording bandwidth use by session, and our later tests showed this happens in real-time. Download a large file, keep refreshing the page and the bandwidth total increases.

If this is all FrootVPN does, that may not matter very much, but our problem is that the company isn't being transparent with its users. If a VPN provider records the bandwidth used per session, it needs to say that, and not make blanket 'no logging' statements which don't tell the whole story.

We installed the Windows client, and initially it looked promising. There's a list of servers, a favorites system for commonly-used locations, a choice of protocols, even a connection log to help with troubleshooting.

Unfortunately, the client didn't always work as we expected. A Quick Connect button doesn't connect you to the nearest country, for instance, instead apparently allocating one at random (although we were in the UK, our first server was in Canada.)

There's something which looks like a conventional country list, but isn't. Unlike just about every other VPN client we've ever used, you can't select or connect to a location with a single or double-click. Instead, every item on the list has its own Connect button, and you must click that to get online. This isn't difficult, but it's clumsy, and makes choosing a server more awkward than it needs to be.

The FrootVPN client has only a few settings. Most of the options are very standard: you can start the client with Windows, auto-reconnect if the connection drops, and set the OpenVPN TCP and UDP ports, for instance.

You do at least get a sort-of kill switch to avoid identity leaks if the VPN connection drops. This looks more versatile than usual, too, with the ability to block all internet traffic, or just traffic for specific applications. But there are problems.

The second issue is that if you choose to block all internet access, the client even blocks itself, and so can't automatically restore the connection. (Instead, you're warned the connection has dropped, must acknowledge this, and the client then unblocks the internet for you.)

The third oddity? When the kill switch is off, you can switch from one server to another simply by clicking Connect. Enable the kill switch and you must manually close the current connection, before switching to another. Again, you'll figure that out quickly enough, but it's clumsy, and awkward.

FrootVPN's kill switch is just about as most basic and unsophisticated as you'll get, then, but there's good news, too: it does work as promised. We forcibly closed both OpenVPN and L2TP connections, and in each case the client immediately blocked our internet access when the VPN dropped. The kill switch may not be technically clever, but it does its job, and that's better than we've seen with some clients.

The FrootVPN website claims it can help you unblock web content, and the Windows client has even has Netflix and BBC iPlayer-related locations to make your life easier.

The service couldn’t unblock iPlayer for us, unfortunately. We tried the official iPlayer option and the two regular UK selections, but couldn't stream content.

There was better news with US Netflix. FrootVPN provides east and west coast US servers, and they both allowed us to access and view US-only Netflix content.

Performance testing started by using an automated system to connect to and run basic checks on all FrootVPN locations. We found two were unusable (Costa Rica never connected, Dusseldorf appeared to connect but didn't allow us to access websites.) Connection times were mostly acceptable at a typical 2-6 seconds, although occasionally this would extend up to 9 seconds. Geolocation checks suggested all servers were in their advertised locations.

When we did get online, FrootVPN initially performed very well. Our nearest UK location gave us an average of 65-66Mbps on our test 75Mbps line. Most European locations were similar at 60-68Mbps, although Poland tailed off at 30-35Mbps.

US performance was relatively inconsistent, with speeds ranging from 30-55Mbps across the country, and occasional drops down to 5-8Mbps.

Connecting to FrootVPN's more distant destinations saw a range of results, with Australia hitting 12-20Mbps, and South Korea managing a just-about usable 7-10Mbps, but most other locations were disappointing in the extreme. Brazil struggled to 2-4Mbps, Japan was so slow that the connection wasn't even able to run our tests, and disconnects were common.

While speed test results can vary for many reasons and shouldn't always be taken at face value, these follow much the same pattern as our last FrootVPN review: speedy in Europe, acceptable in the US, but distinctly below average for the rest of the world.

Speedy in Europe and has a very cheap monthly plan, but the lack of mobile apps and poor performance elsewhere is a major issue. Might work for specific situations, like a short European trip where you need to unblock Netflix, but otherwise you'll get better service elsewhere.