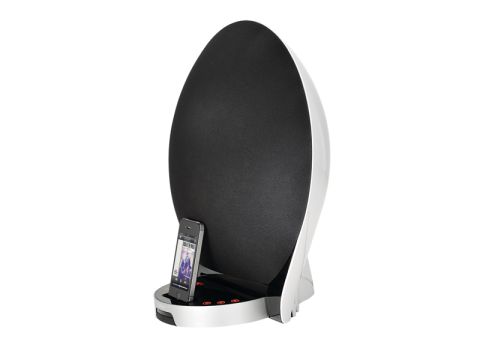 The Luna5 encore's unusual looks may not be to everyone's taste, but the sound quality certainly will be

Edifier is something of a Chinese success story. Emerging in 1996, it's rapidly become a darling of design-conscious digital audiophiles with a string of design awards and rave reviews from the media as well from ordinary customers.

Take one look at the Luna5 encore and it's easy to see why: this is probably the most unusual-looking speaker dock we've seen since the B&W Zeppelin - and it delivers an impressive level of outright sound quality that belies its modest price.

Its unusual squashed-dome speaker enclosure comprises five speaker drive units, with a 'floating' acoustically isolated dock for your iPod or iPhone at the bottom. On the top of the dock are six red-lit, touch-sensitive buttons for controlling things such as the volume level for skipping tracks.

The input selector button on the right enables you to switch between your iPod or iPhone, a 3.5mm auxiliary input hidden behind a rubberised cover on the front, and the built-in FM radio, which boasts 36-station presets. Our only quibble here is that we couldn't get the FM radio with its built-in antenna to work on our test sample (it couldn't pick up a signal), but everything else was otherwise in order.

The Edifier Luna5 even comes with its own long, bulky remote, with lots of additional buttons so you can tweak things like the bass output from the speaker dock's built-in subwoofer.

Obviously at £170, you shouldn't expect the last word in audiophile sound quality, but given its reasonable price tag, the Edifier Luna5 delivers better results than you'd expect. It's capable of handling just about any kind of music – from jazz to pop to rock to classical – serving up plenty of detail and fidelity that's rich, engaging and highly enjoyable.

With just 52W of power on tap, its sound won't fill larger rooms without straining - and the sub lacks low-end oomph. But if we were makers of European hi-fi right now, we'd be worried.