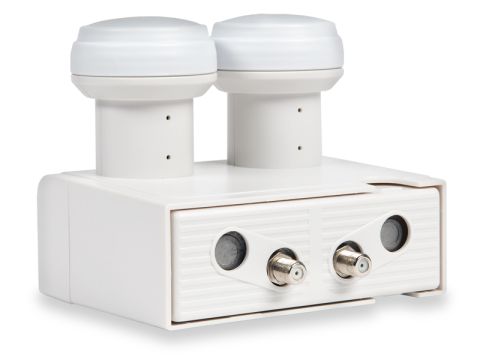 With an impressive performance with our 80cm dish, the Technomate TM-2M is a quality LNB

Technomate has earned an enviable reception for its digital receivers, which deliver excellent value for money. However, it also sells LNBs and monoblocks like the TM-2M, and they seem to represent similar value.

The TM-2M tested here is designed for satellites spaced apart at 6° and also happens to be the most affordable of the bunch.

A version with gold-plated output terminals and a claimed noise figure of 0.1dB is available for a 20 per cent premium.

The 'standard' TM-2M is said to have a 0.2dB noise figure. Note that the TM-2M has a 40mm feed diameter, and so check it will fit your dish bracket before buying.

An interesting feature is that the metal-cased monoblock is enclosed within a white plastic outer jacket.

Installation is straightforward, and alignment marks are embossed into the parts of the shell around the feeds.

Once you've attached the LNB cables, the lower part of the base pulls downwards to conceal the connectors. This is done presumably for aesthetic reasons – you should always seal the connectors with self-amalgamating tape (or something similar).

The same jacket seems to be used for the four-output version, which means that there are two extra holes in the base. Creepy-crawlies will climb into here over time, but this won't affect performance (they can't get into the feeds, which are securely 'capped').

Happily, the Technomate performs just as well as the other LNBs tested recently if our journey across the bands with an 80cm dish is anything to go by.

Naturally, the secondary satellite (Astra 1x, in our case) isn't received quite as well as the primary one (Hot Bird) but under most circumstances reception of both should be reliable.