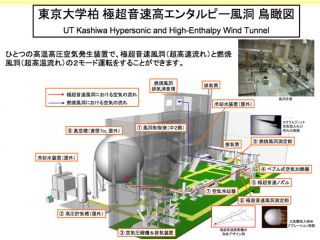 This is the Japanese wind tunnel that will test the paper spaceship. Allegedly.

It's not April yet, but someone in Japan clearly thinks we're going to believe this tall tale of a paper plane that's to be thrown to Earth from the International Space Station.

According to the Asahi newspaper (translated here), the

is working with the

on a folded paper dart that the teams hope to launch from orbit sometime soon.

Apparently, an 8cm prototype of the fragile craft is already undergoing testing in a wind tunnel near Tokyo, where it is being tested at Mach 7 - that's 8,600km/h, by the way.

The developers hope that astronauts on the space station will be able to write "messages of peace" on the plane, but we reckon sticking it in an asbestos box before chucking it Earthward might be a bit more practical.