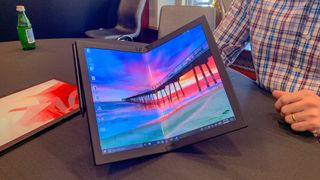 If 2020 didn't already seem like it was going to be the year of foldable devices, Lenovo is making it seem even more likely with the official introduction of the Lenovo ThinkPad X1 Fold at CES 2020. Many of the key details of the new device have been shared by our sister site, Tom's Hardware.

The ThinkPad X1 Fold isn't exactly new, as we'd already had a hands-on with an early prototype of the device in May 2019. The device is the next logical evolution for the Lenovo Yoga Book C930, taking what was a two-screened device and eliminating the gap in the middle where the hinge is.

This new ThinkPad X1 Fold is effectively similar to the Samsung Galaxy Fold, but on a larger scale. It has a 13.3-inch 4:3 OLED display that can fold in half. When it's shut, the device is made to look like a classy, leather-backed notebook. When it's open, it can sit in a variety of positions.

A kickstand on the back of the ThinkPad X1 Fold lets it stand up like a Surface Pro tablet, so you can use the full size of its display with a keyboard for a laptop-like experience.

The display can also fold into a semi-open position. This lets you use it with the keyboard docked on the lower portion of the display, giving you more of a mini laptop to work with. In this position, you'd have about a 9.6-inch display space.

Not the foldable for just anyone

Among the new details to come out is the price. The ThinkPad X1 Fold will start at a stunning $2,499 (about £1,900, AU$3,600). It comes fitted with an unspecified Intel Core processor with Intel Hybrid Technology, which may be Intel's stacked Lakefield design.

That's a high starting price for a laptop or tablet, especially one that only comes with 8GB of RAM. This is definitely going to start out as a business-class laptop. The leather and carbon fiber trappings are also suggestive of this. Given the uncertainties about flexible displays that have only been made worse by the Galaxy Fold's issues, the ThinkPad X1 Fold is likely only going to be in demand for people who have the money to risk on a product that may run into design faults.

Lenovo has put extra efforts into testing the hinge for durability. But, the plastic display that enables its flexibility will be more scratch-prone than a standard glass display. At least we can count on Lenovo avoiding any unsightly hinge crease, as we've seen accomplished on the new Motorola Razr.

The ThinkPad X1 Fold will launch in Q2 2020, per an earlier announcement from Lenovo.