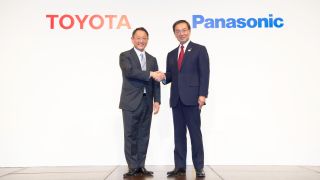 Toyota and Panasonic have announced that the two Japanese companies will form a new joint venture with the aim of developing connected services that will be used in homes and urban development.

This isn't the first time that the two businesses have agreed to join forces and in January they announced a separate joint venture to build batteries for electric vehicles by combining the automaker's R&D and manufacturing strength with Panasonic's prowess in batteries.

Toyota and Panasonic will set up a new company early next year with a focus on technology that will allow the two companies to offer personalized services in the home.

The two companies will be 50-50 partners in the new business and will also increase cooperation at their respective housing operations in their home country of Japan.

Toyota and Panasonic's announcement comes at a time when the auto industry has been beset by increased competition from ride sharing services such as Uber and Lyft and from lower-emission vehicles. This has led automakers to seek out alternate revenue streams in other industries.

Toyota for instance, has been developing connected cars with the ability to share usage information which could be leveraged for on-demand ride-sharing services, insurance and maintenance.

The company is prepared to tap into its partner network and its other operations to hopefully expand into new transportation and home energy services.

Toyota's President Akio Toyota offered more details on its plan to leverage this network to reporters during the announcement of its new joint venture with Panasonic, saying:

“If we are able to use this network going forward not only to manufacture and sell vehicles but to also provide new services, our future possibilities will greatly expand. In addition to cars, I think that having our own housing business and connected business will be a big advantage for us.”