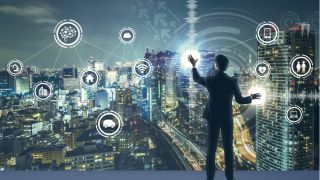 Broadly speaking, we have seen the development and realization of two pivotal technological platforms in the last 45 years. The first of these was the internet, which digitized human knowledge; making it both instantly and widely accessible to society at large.

Instant access to knowledge made the speed of flow of information near-instantaneous - bringing with it enormous gains in efficiency and completely redefining how organisations operate.

The scale of this platform has meant there are several key players, but it is Google who has predominantly pioneered this sphere. After all, Google is so ubiquitous that it has become its own verb for searching for information online.

The second of these major platforms is social media, which has allowed for the digitization of people, human behaviors and relationships. In the western hemisphere, we have seen this platform dominated by Facebook (with WeChat playing a similar role in other territories).

The mass adoption of these two platforms has fundamentally restructured how our society operates. With this in mind, the prospect of a third platform is exciting. But what would this platform look like and how could it be used?

The fundamental promise of the ‘third platform’ is to digitize the physical world.

While we already have comprehensive maps of large portions of the Earth, the third platform promises a new level of fidelity and accuracy that simply doesn’t exist today.

On this proposed platform, all places and geographies will be machine-­readable and subject to the power of algorithms. This would allow for the development of spatial simulation modelling software that uses real-time dynamic simulations and artificial intelligence (AI) to model adaptive environments.

These hyper-accurate models can be used to predict and solve problems faster, safer and more cost-effectively. The potential use cases of such a platform are extensive and have applications for almost all sectors and industries. To illustrate this, we can look to where we are seeing early formulations of the third platform in use currently.

One such sector is infrastructure, where highly-detailed digital models, known as digital twins, are already being used to transform a traditionally digitally laggard industry. Digital twins offer an accurate, digital and up-to-date copy of the real world in a machine-readable format.

This enables those operating in the industries to make more informed decisions about projects, helping to drive improvements in safety, cost-efficiency, waste generation and project collaboration, as well as helping to reduce carbon footprint.

According to our Infrastructure Disruption Survey, the use of technologies, such as digital twins, has allowed companies to save over seven hours per person per month, with 99 per cent of the industry recognizing the technology as fundamental to the future of the sector.

On a larger scale, spatial simulations offering real-time hyper definition can be used to predict and solve problems faster. This has applications for almost any organisation that operates in the physical world: shipping, logistics, resource planning, farming and mining. On an even wider scale, AI and predictive analytics could take this further and allow for these models to predict potentially hazardous weather events.

Recognizing the utility of the third platform, the next step is questioning how it can be realized. Underpinning the third platform is a myriad of other technologies: drone imagery, satellite imagery, lidar, image recognition, visualization software and more. Each of these in themselves represent a technological challenge - but what is fundamentally needed to turn these disparate solutions into a platform unity?