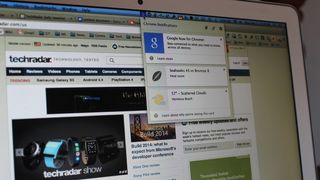 Remember when things used to come to desktops first?

Cutting-edge Chrome beta testers are "living in the now" even more so than usual today thanks to the launch of Google Now for computers.

Google's predictive notification center has made its way to the beta version of its browser on Mac, Windows and Chrome OS after having been on mobile devices since 2012.

What's the weather like where you live? What are the game scores for the teams you follow? What are the directions to that place you just searched on Google?

Whether or not you find it creepy, Google Now for Chrome beta has the answers ahead of time, just like its Android and iOS counterparts.

Google Now lives with the taskbar

Google Now through Chrome lives in the notifications bell that sits at the top of the Mac OS X menu bar or the bottom of a Windows PC taskbar.

Clicking it expands a pop-up windows with relevant flight information, sports scores and weather, some of which is relevant depending on your phone's location.

The update, rolling out through the beta channel right now, was previously available through Google's even less stable Chrome Canary alpha channel.

It's now one step closer to being ready for all Chrome users who are tired of picking up their phone for these anticipatory alerts while at a more powerful, yet sometimes less capable computer workstation.