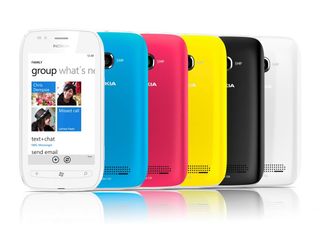 The first Nokia Windows Phone device to land in the United States will be the Lumia 710, which will arrive on the T-Mobile network next month.

The mid-range device, which was unveiled at Nokia World back in October, will launch on January 11th and cost $49 on a two-year contract.

The device itself, which sits underneath the Nokia 800 launched for the European market in November, boasts a 3.7-inch, 800 x 480 ClearBlack LCD display.

Built in HSPA+ will also bring dizzying download speeds of up to 14.4Mbps.

As far as built in apps go, Microsoft Office, Netflix, ESPN and Nokia Drive are all along for the ride.

The launch of a mid-range device on a second tier network is somewhat of a surprising US debut for Nokia and its Windows Phone partnership.

From our hands-ons at Nokia World, the Lumia 710 appears to be a solid device, but perhaps the company could have made more of a splash with the flagship Lumia 800 device on AT&T or Verizon?

Instead Nokia, Microsoft and T-Mobile have decided to aim this device at the "150 million Americans who haven't purchased their first smartphones."