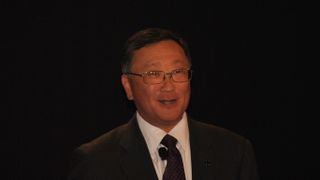 BlackBerry's intended acquisition of AtHoc furthers the company's mission to become the most secure mobile platform in the industry, said CEO John Chen at an event in New York City.

Chen said he would like to marry AtHoc, an emergency alert system, with BlackBerry's BBM instant messenger service. The AtHoc solution enables businesses and agencies to send mass alerts to people across devices and operating systems.

What else is BlackBerry up to?

Another key aspect of BlackBerry's strategy moving forward is helping organizations and its employees manage the "separation of work versus life," Chen said. BlackBerry's goal is to enable the business to manage the container that stores company information, but shield the user from having the IT department access personal information.

In addition to acquiring niche companies like AtHoc, data-synching service WatchDox and Movirtu, a virtual SIM service, BlackBerry has been the rumored target of several technology manufacturers, including Xiaomi, Microsoft and Samsung.

A Google acquisition also wouldn't be a huge shock. Back in February, Blackberry and Google partnered to allow Google productivity tools to run on BlackBerry devices. BlackBerry also recently purchased two Android domain names: AndroidSecured.com and AndroidSecured.net, which is a hint that BlackBerry may begin running the Android operating system on its phones.