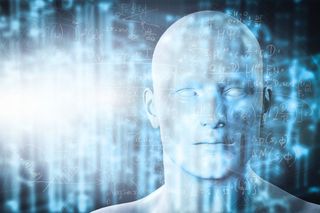 What’s the first thing that comes to mind when you read the words ‘artificial intelligence’?  Do you think of an algorithm that could solve climate change, or of HAL from 2001: A Space Odyssey? Be honest.

My point is: AI has become a loaded term, as has data. People are weary, even fearful, of new technology – but then, that’s nothing new. According to one study, 47% of people believe the rate of technological innovation is happening too fast. And today, only 56% of us actually trust AI. Really that’s because, for the vast majority of people, AI remains a mystery. And its human nature to fear the unknown. Most of us understand AI through the lens of popular media – and filmmakers have really given it a bad rep.

There’s this public anxiety around data analytics and AI. Are we sleepwalking towards a Black Mirror-style surveillance state? Will intelligent machines replace us in the workplace? Are social media companies using data to brainwash us?

Wael Elrifai is the VP for Solution Engineering at Hitachi Vantara.

Ultimately, it boils down to a lack of understanding about the technology – and that’s equally true in the business world. While the democratization of artificial intelligence has made businesses more aware of the technology, there remains uncertainty around how to implement it and, more importantly, why it really matters.

I recently spoke to a room full of IT service management staff and decision-makers, R&D managers and solutions architects at Smart IoT London – people on the font-line of innovation everyday – and I told them to go out and save the world. If you think that sounds overambitious – good. Because now is the time to challenge ourselves.

The Dutch software engineer, Edsger Dijkstra once said that: “the question of whether a computer can think is no more interesting than the question of whether a submarine can swim.” I reference this now because, despite these fictionalizations about cognizant AI, I’m not actually asking whether computers can think. This isn’t a philosophical debate about whether AI is sentient. That isn’t what’s keeping business leaders up at night.

We’re talking about AI in the real-world. What’s the point of it? In the most basic terms, AI makes data useful, especially big data being processed in massive online cloud storage formats. I mentioned the democratization of AI – that was triggered by a dramatic drop in cost to compute. We measure computing power in gigaflops, and in the 1960’s one gigaflop would have cost around $150 billion. Today it would cost you about three cents using cloud computing services. Couple this with an explosion of data and suddenly businesses are scrambling to see what they can do with the technology.

But democratization doesn’t equate to understanding – that’s just the first step. AI has such infinite potential that we haven’t even scratched the surface of what the technology can do. The real limitation is our own ambition. But ultimately it is businesses that will be bringing these game-changing innovations into the real world.

One of the things that makes me so proud to work at Hitachi Vantara is that we believe every business has a double bottom-line. That is, not just a bottom-line in the typical financial sense, but also a corporate social obligation. At Hitachi we call this Social Innovation and here you can find some interesting examples.  And in today’s climate of technological mistrust, this isn’t a nice-to-have sentiment – it’s an imperative. The onus is on organizations to push the limits of AI for a purpose beyond simply making and saving themselves money (although, that will also undoubtedly be a welcome result).

And here’s why it matters. One statistic that has always resonated with me is that around 10% of the world’s GDP is in logistics. That’s a lot. And that’s significant because it means that one small inefficiency in the logistics chain can have a knock-on effect on the cost of goods.

I’m originally from Tripoli, Northern Lebanon – one of the poorest cities in the Mediterranean. In less developed parts of the world like that, if disruption in the supply chain causes the cost of your food go up by 5%, your family eats 5% less. And that goes on to have a detrimental impact on your health. So, for someone already living on the edge of survivability, basic logistics can have a dramatic impact on everyday life.

It’s unsurprising that the logistics and transportation industries are poised to be the major pioneers in this field, using AI with enterprise resource management. Moving things from A to B may sound straightforward, but it’s the opposite. When you walk into your local Tesco and purchase imported tomatoes, you probably don’t think about the cross-continent journey they took to get to your dinner table. The entire logistics industry hinges on efficiency. When bad weather delays a shipment from crossing the ocean, that has a domino effect on the rest of the supply chain. In the previous century, such disruptions were considered out of our hands – but in 2019 we have the technology to do something about it.

There are businesses already starting to deploy AI to solve these problems. One example is a U.S. company called Lineage Logistics – they supply food to supermarkets. The company uses AI to learn from their existing operations and then predict, simulate, and optimise outcomes ultimately reducing the cost and variability in the logistics chain.

And it’s not just about driving down costs either or even fleet management – optimization is critical to reducing the logistics and transportation industries’ carbon footprint. At Hitachi we helped Stena Line – one of Europe’s biggest shipping companies – implement AI on their vessels, reducing fuel consumption and minimising their environmental impact.

In around 30 years, the world population is expected to reach 9.8 billion. That’s a lot of mouths to feed, and a lot of food moving from here to there. So, you can really appreciate why we need to think smarter about how we’re going to address these challenges today.

The State of Play

So where are we currently at? Well, AI and advanced analytics projects are already starting to address some of this generation’s biggest challenges: natural disasters, crime, mass urbanization, climate change. The examples above are just a flavour of AI’s vast potential – it could completely revolutionise every sector, from healthcare to retail. Eventually, it will have an even greater positive impact on all our lives – and most of us won’t even know it. But there’s still a long way to go.