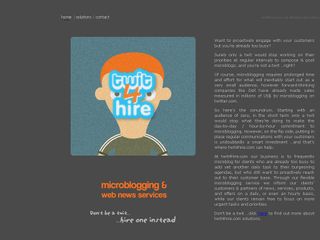 Are you too busy to update your 140-character-an-update twitter feed? Well, apparently it's enough of a problem for a start-up company to launch offering a 'twit' hiring service.

Twit4hire.com has just launched its microblogging service, allowing those people who simply do not have enough time in the day to update their feed to "hire a twit to Twitter for you".

"With trailblazing microblogging businesses such as Dell accessing sales measured in millions of US$ through Twitter.com, it's clear to see that microblogging represents a new sales channel," reads the launch release.

"However when faced with a total audience of zero on day one, many businesses find it difficult to justify allocating human resource to access this new route to market.

The start-up offers to write and publish microblogs on behalf of clients, presumably in order to build up followers and make it worth the company's while.

It's hard to imagine that anyone would want to get on Twitter and not be able to spare the time to actually stick in a sentence or two every couple of hours.

But if anyone wants to pay for this, then who are we to argue?