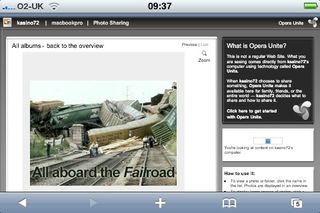 Opera has released Opera 10.10 with Opera Unite, the service it claimed would 'reinvent the web' when it was announced back in June.

Opera Unite has been in beta for some time, and has now finally been rolled into the Opera 10 browser.

"What we are really doing is reinventing how we as consumers interact with the Web.

"By giving our devices the ability to serve content, we become equal citizens on the Web.

"In an age where we have ceded control of our personal data to third-parties, Opera Unite gives us the freedom to choose how we will share the data that belongs to us."

Techradar checked out Opera Unite in its earlier incarnation, with Gary Marshall suggesting he was 'convinced that Unite really is worth getting excited about.'

Now it has arrived in a full release, it will be interesting to see if the public understand the functionality, and the talk of Web 5.0 of course.

You can download Opera 10.10 with Opera Unite at http://www.opera.com.