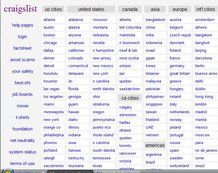 The US site has been riding a wave of recent controversy, being named in high-profile cases including the media dubbed 'Craigslist killer' case, in which 23-year-old Philip Karkoff has been charged with killing a masseuse whose services he allegedly found through the site.

"We are optimistic that the new balance struck will be an acceptable compromise," explained Craigslist CEO Jim Buckmaster.

However, the changes may not prevent the company from getting into more trouble, with New York Attorney General Andrew Cuomo describing the move as 'half-baked'.

"Several weeks ago, we informed Craigslist of an impending criminal case that implicated its website. Rather than work with this office to prevent further abuses, in the middle of the night, Craigslist took unilateral action which we suspect will prove to be half-baked," Cuomo said in a statement.