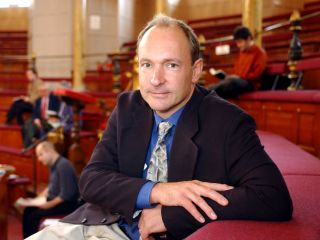 TBL - has a big trophy cabinet

Sir Tim Berners-Lee is to be awarded with a lifetime-achievement Webby for inventing the World Wide Web.

Although the more cynical will question why he hasn't already won the award, for inventing the whole thing, TBL will be given the gong at the 13th annual awards in New York on June 8.

"Sir Tim Berners-Lee sealed his place in history with the creation of the Web, but more importantly, he guided its development as a tool for promoting creativity and humanitarian values," said David-Michel Davies, executive director of The Webby Awards.

"It is an honour to pay tribute to a brilliant pioneer responsible for creating the most influential mass medium the world has seen," he added.

The Webby Awards will also see Jimmy Fallon (Person of the Year), Trent Reznor (Artist of the Year), and Twitter (Breakout of the Year) pick up Special Achievments, alongside the winners of the other awards.