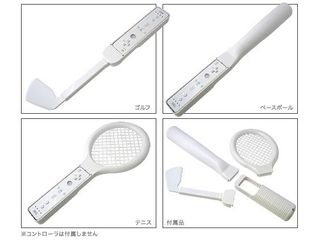 The Pega Sports Pack for Wii went on sale this morning

One of the most significant announcements in the history of video gaming was made in Tokyo today when Miyavix announced a collection of plastic stick-on attachments for Nintendo's much-talked-about Wiimote controller.

The Pega Sports Pack for Wii went on sale at Miyavix's Vis-à-vis online shop this morning at JPY2,780 (£11.80). For that outlay you'll get a selection of three pieces of plastic shaped like a tennis racquet, a baseball bat and a golf club. We think the club's probably a three iron, by the way.

The low price is simply because the add-ons don't actually do anything beyond, well, add on about 40cm in length to the Wiimote. The idea, of course, is that when playing the fabulous Wii Sports game the chunks of plastic give gamers more of a feel that they're actually swinging something.

It's hard to imagine that the Pega gear will add much to the experience but, given the surprise success of the Wii , who knows what's possible? We'll just have to give it a whirl, which is probably what Miyavix is banking on thousands of Nintendo fans doing. J Mark Lytle