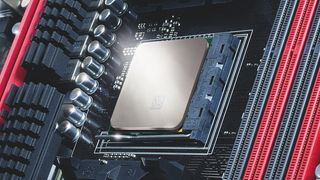 Nothing to see here, move along. No plans for new AMD FX chips

I'm very, very worried about AMD's upcoming Steamroller CPU architecture. For some time, it's seemed like the last great hope for some real competition in the PC processor market. Now it looks like it might be dud.

How so? It's AMD's latest official road map that has me worried. It shows the existing Piledriver architecture sticking around as the basis for its performance FX processors through the end of 2015. After that, who knows, FX chips may disappear completely.

Meanwhile, Steamroller will appear, but only in AMD's Fusion APU, codenamed Kaveri. Those chips are limited to four cores or two AMD modules and as AMD's own roadmap states, only extend into the mainstream desktop space. The performance segment will remain populate by Piledriver FX chips.

To me, that means one thing. Steamroller isn't the big step forward I'd hoped for. If it was, AMD would be pushing hard to make Steamroller FX chips. But AMD isn't, so Steamroller probably can't be.

This is a disappointment. You could, of course, make the good-enough argument. That is, you could say that CPU core part of the PC processor equation is already 'good enough'.

Build it and they will come

Moreover, the 'build it and they will come' approach has served the PC well over the years. Many's the time someone has question the need for more than 'x' amount of memory or more than 'y' number of CPU cores. But usually, somebody comes along and finds something super interesting to do with all that computing capability.

And if you accept that it's generally a good idea for PC processors to keep getting faster, the prospect of AMD not pushing on is very worrying. Obviously it means AMD isn't making much progress. But it also lets Intel off the hook.

The latest info regarding Intel's Intel's upcoming Broadwell family of mainstream CPUs (successor to the already-underwhelming Haswell generation) is that it will top out at four cores once again, despite yet another shrink to 14nm.

Broadwell is out in 2014 and will stick around at least a year, so we're talking late 2015 as the earliest opportunity for a significant upgrade on the CPU side from Intel. OK, Intel offers six core chips on the LGA2011 platform for the desktop. But really, that's an overpriced and over-engineered solution that's really intended for desktops and servers.

Truly, I hope I'm wrong and Streamroller will rock. But even if it does, it seems the earliest it will rock performance desktops is 2015, if ever. And I doubt even that will happen. Woe is the PC processor market.