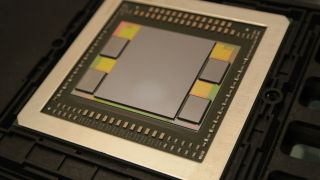 A few months ago, we took an aging laptop and brought it kicking and screaming into 2016. We quadrupled the RAM, swapped the hard disk for an SSD and transformed it from a bit of a laggard into the electronic equivalent of Usain Bolt. Usain Volt, anyone?

Bad puns aside, you've probably experienced similar performance boosts as PCs and Macs boast ever more RAM and ever faster SSDs. But what's on the horizon is even more exciting…

The performance of any device is largely due to three things: the CPU/GPU, the memory and the storage. While most of the attention is often focused on the processor and graphics solution, key developments are happening in memory and storage as well which will affect CPU and GPU tech, too.

One of the most promising new technologies is High Bandwidth Memory or HBM for short. Although it's a very new technology Samsung and Hynix are already developing the third generation, which they expect to commercialise in 2019 or 2020.

Unlike traditional memory, where chips are laid flat on the memory module, HBM chips are stacked. That shortens the distance between the chips and the CPU or GPU, achieving the same speeds as on-chip integrated RAM, and it enables manufacturers to cram more RAM into smaller spaces. And we don't just mean slightly smaller.

AMD, which originally created HBM and the firm's Fiji processors are the first GPUs to use HBM, reckons HBM takes up 94% less space than the equivalent GDDR5. Where 1GB of GDDR5 takes up 28 x 24mm of surface space, 1GB of HBM needs just 7 x 5mm. That's particularly exciting for virtual reality, as it means powerful GPUs could live inside the headsets without them being so heavy you can barely move your head.

As AMD explains: "GDDR5 has served the industry very well these past seven years, but as graphics chips grow faster, their appetite for fast delivery of information continues to increase." GDDR5 is good, but its ability to meet those requirements "is beginning to wane as the technology reaches the limits of its specification." HBM resets the clock, offering more than three times the bandwidth per watt of GDDR5.

Current HBM supports up to 8 dies per stack, 8GB per package and achieves speeds of 256GB/s. Third generation HBM will boost those numbers even further, doubling the density to 16GB per die and enabling stacks more than 8 times higher. The only negative is that you can't get it yet.

According to Intel, 3D XPoint technology is "the first new memory category in more than 25 years." Up to 1,000 times faster than NAND flash storage, up to 1,000 times more reliable and capable of storing up to 128GB per die, it's the technology behind Intel's exciting Optane SSDs.

The details of 3D XPoint – also known as QuantX, which is the name preferred by Intel's partner, Micron – haven't been fully disclosed, although Intel does say that it is "not based on electrons"; it's believed to be based on 'phase change' technology that writes data by heating a glass-like material.

Phase change chips can write or rewrite individual bits, something flash storage can't do, and just adding a buffer of phase change material to existing flash storage technologies can deliver significant performance improvements. Intel promises to launch its Optane SSDs by the end of 2016, and to have 3D XPoint RAM for PCs next year.