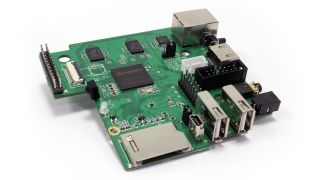 Imagination Technologies has launched the MIPS Creator CI20, a palm-sized micro-computer that runs Android 4.4 KitKat and various flavours of Linux.

The £50 ($65) device has a 1.2GHz dual-core processor and MIPS32-based Ingenic System-on-Chip (SoC) that's backed up by 1GB of DDR3 SDRAM. It comes with 4GB of onboard flash memory for storage, which can be expanded using an SD card.

London-based Imagination develops the IP for SoCs housed in many of world's top smartphones and tablets. Its PowerVR graphics technology powers Apple's iPhone devices, among others.

The company is aiming the low-power board at open source developers and system integrators who it hopes will use it to develop applications and projects – ranging from Internet of Things (IoT) solutions to home automation, gaming and wireless multimedia streaming.

Speaking at a launch event in London, Tony King-Smith, EVP of marketing for Imagination, said that the board marks the start of a family of micro-computers from the company, which will "go all the way from universities to students to entrepreneurs."

The MIPS Creator CI20 was originally made available to university students, developers, hobbyists and partners in August 2014, which led to demand for a commercial release, according to Imagination. It's available now for pre-order and is scheduled for global release in January.