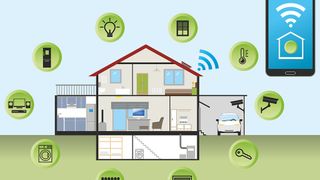 The rise in wireless technology and connectivity means that there are now more opportunities that ever to create a home automation system, controlling everything from lighting, heating, to entertainment centers. Using nothing more than voice commands, a visual interface, or a mobile app, you can use automation to create a truly smart home.

Utilizing wireless broadband, Bluetooth, ZigBee, z-wave, and other protocols, different devices can now be connected together from a central home hub. Because of the market interest in opening up the home automation market, these days most smart home products will work with different home hub automation systems, though take care to check before you buy.

The range of smart products continues to grow. There are video doorbells, home security systems, thermostats, smart lights, smart plugs, smoke and flood detectors, and even locks for the front door of your home. There are also smart TV's, home music systems, and other audio-visual entertainment products, as well as robots for vacuuming floors or for mowing the lawn, all now available to be controlled by smart wireless technology.

The Amazon Echo is a leading hub for home automation, using Amazon's proprietary Alexa voice-powered technology. The Echo can work as a standalone device, connecting to a cloud-based service to provide music, make calls, set up alerts and times, ask questions, or even request weather and traffic reports. The Echo has multiple omnidirectional microphones to make it easy to take voice commands from across a room, and includes multiple speakers to make it easy to be heard.

Additionally, Amazon now provides a range of product variations. While the original Echo costs $99, Amazon have released a smaller version called the Echo Dot, which retails for half the price yet provides similar functionality. There are also now the Echo Spot smart alarm clock, Echo Show to act like a small portable TV, and even an Echo Auto for your car, as well as the Echo Plus and the Fire TV Cube media player, all of which come with Alexa built-in and use the same smart technology.

Whichever Echo type you use, it should be compatible to most smart peripheral devices. Even better, connecting them is as easy as saying "Alexa, find my devices."

Overall, Amazon have been pushing hard on its Alexa-powered devices in order to make them as accessible as possible. Also watch out for rolling special offers throughout the year which can see discounts applied to some or all of the Echo range.

You can read our Amazon Echo review here.

The Google Home Hub is another common system for setting up a home automation system. It uses Google Assistant to perform tasks using voice commands, but works mainly as a visual interface, in effect acting like a voice-powered tablet device. It can display local weather information, events and notices, daily schedules, as well as play music and video from YouTube and other services. When not in use it can display a clock across its screen, or serve as a digital photo frame by displaying images from your Google Photo account.

It also, of course, works as a central home automation hub, and easily connects with many other smart devices. You can control lighting, heating, security, and the typical range of smart home through voice commands or the user-interface by swiping or tapping screen options as required.

Where the Google Home Hub really excels is through its integration with Google Services, not least web search, which is still more developed than most competitors, if somewhat over-whelmed by ads and Google self-promotion these days.

However, the Google Home Hub isn't a full media device so you can't access digital subscriptions the way you can with Chromecast. Additionally, while the display is great for close-up interactions, the small 7" screen means it's not so usable when across a room.

Altogether, the Google Home Hub is a great little piece of kit that works fine with other smart devices, and the addition the visual element can be user-friendly at times. However, Google continue to be plagued by privacy concerns, not least the company's zeal in storing as much user-data as possible.

You can read our Google Home Hub review here.

Customize settings with a Wink

The Wink Hub 2 is one of the most versatile of the featured hubs for home automation. The hub itself can be set up wirelessly or connected to your router with an ethernet cable. After that, you download the Wink app to your Android or iOS device, and then control everything from inside the app. From there you can select which other smart devices devices you want to connect with, and control their settings accordingly.

This means that commands are generally made via a visual interface, similar to the Google Home Hub. However, as it's all run through a device you're likely to be carrying, such as your smartphone or even wearable smartwatch, you don't need to worry about looking across a room for information. However, the Wink 2 doesn't use voice commands by default, but you can use any existing voice assistant built into your device, such as Google Assistant or Siri, or you can even use Alexa.

Where the Wink Hub really excels is the ability to set up conditions for your other smart devices by default, making it truly the center of your home automation system. Using IFTTT protocols - IF, Then, This, That - you can set your smart devices to activate and do specific things when certain conditions are met. For example, you could set your smart lights to come on automatically at specific times, or the heating or air conditioning to come on at set temperatures, or tell security cameras to record when a door sensor is activated. In this way, your home can become not just connected but automatically controlled. The one downside to this is that the Wink 2 app might not offer the same fine-tuning that dedicated apps for the smart devices might also offer, such as command a smart thermostat to be switched on-off across vacation dates.

Overall, though, Wink offers a decent system with more options than some other automation hubs offer. This is especially by allowing your controls to be more personalized using IFTTT as a built-in default, something other hubs often need third-party software to enable.

Samsung tries to get smart

The Samsung SmartThings hub aims to bring the smart home system together with a single home automation hub, which is operated through a mobile app. Samsung also produce a number of peripheral devices to work directly with it, not least motion sensors, multipurpose sensors, and smart buttons. The Samsung SmartThings hub also plays well with with most third-party smart devices, though it doesn't have so many connectivity options as some, being mainly restricted to Z-Wave and Zigbee protocols. What it does offer, though, is simple IFTTT customizations to make a home truly smart.

A notable feature of the Samsung SmartThings hub is that it comes with a built-in battery power option, so that in the event of a power failure the system will continue to run, unlike some standalone hubs. It's also relatively simple and painless for other smart devices to connect with the hub, at least at first. However, while Samsung are known to be good with hardware, they've yet to established their credentials with software, and this shows with the SmartThings app in that it isn't so user-friendly as some other app-based home automation systems.

If you find the app restrictive, you can always set-up voice commands by connecting with Amazon Alexa or Google Assistant to work with it, but it's not set up to provide the same multimedia experience that other voice-powered home automation systems can deliver, unless you plan to connect with existing smart audio-visual devices.

All in all, the SmartThings hub can work well for people who are simply looking to set up a smart home automation system, but it's really set up to work with a lot of different pieces of hardware, rather than focused on delivering an immediate experience that some rivals can.

The Apple HomeKit is a home automation system specifically for users of Apple devices, using an iOS or macOS app to remotely control a whole range of smart devices around the home, using either a touchscreen or voice commands using Siri.

While the HomeKit has been available for a number of years, stringent demands by Apple for hardware security meant few third-parties originally developed products for it - these rules have since been relaxed to allow for software security measure to replace them instead, and the result is that the Apple HomeKit now supports a wide range of different smart peripherals.

However, the Home app used for controlling the HomeKit still suffers from minor usability issues. Connecting new smart devices isn't so automated as with other home automation systems, as they have to be manually added by scanning printed codes and this can only be carried out on an iPhone or iPad, not from a Mac. Additionally, the Home app is sometimes unable to manage smart devices as well as the dedicated apps for those smart devices.

Even still, there's now a good range of additional hardware available in terms of audio/video, lighting, thermostats, sensors, and cameras similar to other hubs. Additionally, Siri voice controls remain highly developed and are often more nuanced than some other voice assistants, allowing you to speak in a more natural and less artificial voice. There are also some nice configuration settings for rooms and zones so the whole smart experience can feel more customized than some others.

Overall, while the HomeKit can seem a little more limited in some ways than other home automation systems, it can still deliver a very smart experience.