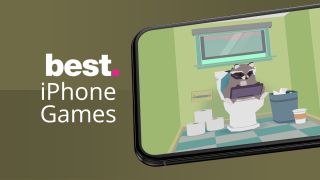 If you've got a new or upgraded iPhone, or are simply just bored with what you've already got, then you'll be exhilarated to hear that you can revolutionise it, turning it into one of the greatest consoles of all time.

That's because the iPhone arguably kicked off the mobile gaming revolution, becoming home to exciting multitouch innovation through to ports of famous arcade titles.

Today, most phones are capable, powerful handheld consoles – if you know the right games to buy.This round-up covers the best iPhone games available right now. It’s split into categories, so you can jump right to the top racers, puzzle games, adventures, platformers, and more.

We’ll also highlight one new game every two weeks, so remember to check back regularly to get a taste of the latest game to consume your waking hours.

Song of Bloom plays with the conventions of narrative and games. Ostensibly a puzzler with a smattering of hidden object smarts, you work through the game by spotting clues, and later drawing them on to the screen at the appropriate moment; but the second you start experiencing Song of Bloom, you immediately recognize it’s far more.

At its heart, it’s a story. Fragmented but meaningful, it tasks you as the viewer with formulating its whole in your mind. And as you do, scenes you explore bring to mind everything from classical abstract art to modern digital visual manipulation.

It’s clever without being over the top, and impactful without being too knowing. If you had to place Song of Bloom alongside other apps, there are echoes of Simogo’s The Sailor’s Dream, and breakout hit Florence; but this title’s very much its own thing.

These are our favorite iPhone card games, RTS and turn-based strategy titles, and board games to check out right now.

Starbeard features a race of space gnomes, attempting to defend their gardens from aliens that look an awful lot like garden pests. But in order to stab them, you must engage your brain rather than your sword arm, because Starbeard is a match puzzler.

The game happily plays with conventions. You can only move items on the bottom of each column, and your protagonist’s position within the grid is key when it comes to engaging bugs. However, your attacks rely on actions that only become available if fully charged by you matching certain items.

Starbeard therefore gives you something more than a typical gem matcher, demanding you think several moves ahead; and the strategy the game’s set-up demands ensures victory over those nasty bugs depends on your brain, rather than the dexterity of your digits.

P1 Select is a single-screen dungeon crawler with a twist. At the bottom half of the screen is a basic maze, with its walls, monsters, bling, and an exit. At the top half is a player select grid. As you move within the maze (in turn-based fashion), the player selection shifts accordingly.

This is, to put it mildly, perplexing. At first, P1 Select merrily smashes your brain out with a brick. Even though the game has just nine screens, getting to the end seems like a daunting prospect.

At some point, it just clicks. You figure out how to goad monsters, and better switch between players. Then you can work on improving your strategy – a must, given that your high score is actually an average of recent runs. Thinky stuff, then, and all the better for it.

Kingdom Rush Vengeance is the latest entry in mobile gaming’s foremost tower defense series. As ever, the basics involve using resources to buy towers that stem the flow of adversaries. If too many of them reach their goal, you’re defeated and must try again.

The twist – at least from a storyline perspective – is that you’re the bad guy. Vez’nan the wizard has had enough, and is now on the rampage, attacking his nemeses. (How this is achieved through tower defense, we’ve no idea, but, well, video games.)

It’s visually smart, with varied levels, plus added strategy in the form of heroes to deploy and special powers to unleash. Even though it’s a touch fiddly on iPhone, and gates some towers and heroes behind IAP, Vengeance should be immediately snapped up by any fan of the genre.

Twinfold initially comes across a bit like iOS tile-sliding match classic Threes! You move cards within a claustrophobic grid, aiming to match pairs and double their face value, and cards all sport expressions, imbuing them with the kind of personality typically absent from such games.

Very rapidly, though, you realize Twinfold has more in common with turn-based dungeon crawlers than puzzlers. Your aim is primarily to survive; and this requires you learn and master rules and powers that enable you to efficiently deal with enemies roaming the mazes that shift and change every time you gulp down an energy-giving yellow card.

Despite the tight confines of the arena, there’s loads of depth here – but it sits behind a vibrant and inviting interface that ensures immediacy and accessibility. Top stuff.

Euclidean Skies takes the framework behind iOS classic Euclidean Lands and stretches it to breaking point. Lands had you move in turn-based fashion on floating structures akin to Rubik’s Cubes, attacking nearby foes in chess-like fashion. Manipulating the landscape was as important as the direction of your next step. But in Skies, the land itself can be pulled to pieces.

This means the original’s quiet clockwork elegance has been replaced with a kind of brain-thumping chaos. You may be tasked with obliterating a giant monster’s spine by reworking the landscape, or figuring out how to simultaneously carve a pathway to a switch and some doors.

It’s hard work, but hugely rewarding; and even though the game’s a touch fiddly on the smaller screen, iCloud sync means you can always pick up from where you left off on your iPad.

Reigns: Game of Thrones slaps a famous license on now-familiar Tinder-meets-kingdom management larks from the original Reigns, and follow-up Reigns: Her Majesty. You tend to the needs and desires of your subjects and enemies, keeping the army, church, people and bank happy – but not to the point they’ll instigate your untimely demise.

Flick cards left or right and your approval ratings change accordingly – and sometimes unpredictably. Quests and themes run throughout, providing surprising depth, given the basic nature of your interactions.

The writing is great, although the game is more enjoyable if you’re a fan of the TV show on which it’s based. But even if you’re a newcomer, this Reigns is fun, with you seeing how far you can get into its complex narrative web before being brutally taken down by any number of foes.

Sid Meier's Civilization VI is one of the PC’s finest 4X (eXplore; eXpand; eXploit; eXterminate) strategy titles. Its turn-based shenanigans have you explore a brand-new world, aiming to be the dominant civilization through conquering space, getting absurdly rich, or giving everyone else a kicking until your mob’s the only one left standing.

When the game arrived for iPad, that was an eye-opener, but now it’s on your iPhone. This isn’t a cut-back, cartoonish take either – it’s the full experience.

There are drawbacks beyond the high price – the game’s a touch fiddly on a phone, requires powerful hardware, and lacks cloud save sync. We’d love to play a few turns on the train and continue later on an iPad. Gripes aside, this game showcases the potential for immersive AAA experiences on iPhone like no other.

Reigns: Her Majesty is a kingdom management game smashed into Tinder. You must tend to the needs and desires of your subjects, ensuring the church, people, army and treasury are kept happy – but not powerful enough to instigate your untimely demise.

Actions happen by flicking cards left or right in response to requests and questions. Your approval rating with the aforementioned factions then changes – sometimes unpredictably. It’s a simple, fun system, but one with surprising depth.

This is partly down to a great script, but the balancing act is further complicated and augmented by challenges. When completed, these often unlock new cards and storylines. And should things go badly wrong, death is not the end – quests thread throughout the ages as you play on as the next in a seemingly endless line of queens.

Card Crawl is solitaire reimagined as a dungeon crawler – or perhaps the other way around. Regardless, it pits you against a grumpy ogre’s deck of 54 cards. During each round, he deals four cards, which may be a mix of weapons, potions, spells, and hideous enemies.

Your own four slots are for the adventurer, your two hands, and a backpack to stash items in for later. The adventurer’s health is diminished when fighting monsters (unless armed), but you can counter by getting stabby with swords (or hiding behind a shield, like a coward).

Games are brief – only a few minutes long – but Card Crawl manages to balance randomness and strategy. Over time, you can unlock new abilities and figure out strategies to boost your high scores. It’s a polished, entertaining and clever take on card games that’s ideal for iPhone.

High-octane card games don’t seem the greatest fit for iPhone gaming, but Exploding Kittens perfectly captures the manic chaos of the Oatmeal-illustrated original. As per that version, this is Russian roulette with detonating cats.

Players take turns to grab a card, and if they get an exploding kitten, they must defuse it or very abruptly find themselves out of the game.

Strategy comes by way of action cards, which enable you to peek at the deck, skip a turn, steal cards from an opponent, and draw from the bottom of the deck “like the baby you are”.

Local and online multiplayer is supported, timers stop people from dawdling, and a ‘chance of kitten’ meter helps everyone keep track of the odds. Large hands of cards rather irritatingly require quite a bit of swiping to peruse (although cards can be reordered), but otherwise this is first-rate and amusingly deranged multiplayer mayhem.

Nintendo fans probably wonder why the big N hasn't yet brought the superb Advance Wars to iPad, but Warbits now scratches that particular itch. However, although Warbits is influenced by Nintendo's turn-based strategy title, it isn't a copy — the iOS game brings plenty of new thinking to the table and is very much optimised for the iPad.

Working with 16 varied units, you conquer a series of battlefields by directing your troops, making careful note of your strengths and the enemy's relevant weaknesses. All the while, Warbits merrily has you and your opponent trading barbs, often about subjects such as whether tomatoes are fruit, because that's the kind of thing you'd go to war over.

Finish the 20-mission campaign and you'll have a decent grasp of Warbits, and can then venture online to take on other human players across dozens of different maps. With superb visuals, enough new ideas over the game that inspired it, and a single one-off price-tag, Warbits is a must-buy for any iPhone-owning strategy nut.

Current page: Game of the week and the best iPhone strategy games