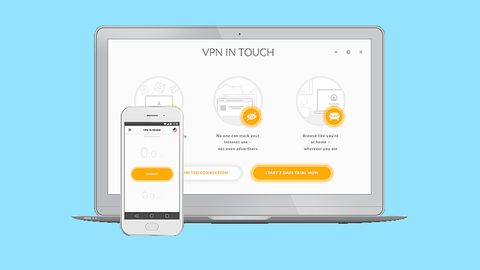 Broken promises, short on features, no support, and that's just for starters. When it comes to this VPN provider, our simple advice is to run in the other direction. And don't look back.

VPN in Touch is a German provider which offers a simple VPN service for what looks like a very low price.

Figuring out exactly what is on offer here can take a while, as the website and apps sometimes say different things. So, the website reports that the service has a disappointing nine locations available (United States, United Kingdom, Canada, Germany, Netherlands, France, Japan, Singapore), but the app lists 26. Well, okay.

There's more confusion with the apps, where the website claims there are downloads for Windows, Android, iOS and even Windows Phone, but the reality seems to be very different (more on that, later.)

The VPN in Touch website even claims it can unblock "Netflix and BBC iPlayer, no matter where you are."  Hard to guarantee long-term as Netflix is constantly working to detect and block VPN connections, but that's what customers are promised.

The main attraction here is probably the price, although that's also confusingly presented. The monthly plan is advertised on the website at a fairly average $9.99 (£7.68) a month, but paying for a year upfront cuts that to only $2.50 (£1.92) a month, a fraction of the cost of most competitors.

The service offers a 7-day free trial, and if you sign up, you're protected by a 30-day money-back guarantee. Beware, though, that's not all it seems. You only qualify if you've transferred less than 500MB of data, a tiny figure you could exceed in a few minutes of video streaming or speed testing.

In theory there's a free product, although that's almost as feeble, restricting you to only 50MB of data a day.

While most VPN providers plaster their sites with ‘No logging!’ statements, VPN in Touch barely mentions the issue at all, beyond a bland statement that “VPN in Touch does not collect or log any traffic or use of its Virtual Private Network (VPN).”

Visiting the Privacy Policy gave us a little more information, which again is trying to be reassuring:

"We never associate your email, true IP address, username, or unique mobile ID with your browsing information or online activities when you are using VPN in Touch apps."

What is this 'unique mobile ID', we wondered? The company might explain it here: 'When you launch VPN in Touch, we also collect device-specific information, such as the hardware model, operating system version, browser type, language, wireless network, and mobile network information. This information does not identify you, and we use it to provide and improve the Services, troubleshoot, and perform analytics on our services.'

This doesn't personally identify you, then, but it's enough to allow the company to identify an individual device and tie it to a session.

VPN In Touch also collects data on your web browsing, although that's not quite as bad as it sounds. This is the relevant paragraph from the privacy policy:

"When you use VPN in Touch to access the internet, we collect only anonymous, aggregate data about which websites you visit and which apps you use. We do not attribute any specific website visits or app usage to any specific user. We collect this information to: 1. Perform analytics on our services, including measuring whether our users are able to successfully access certain websites or apps; 2. Troubleshoot service issues and improve service quality; and 3. Place generic ads in front of specific apps or websites."

The service is monitoring the websites you visit and the apps you use, and using these to help select the ads the free plan might display. That's not good news, but if this data isn't associated with your account then there's little impact on your privacy, and overall, it's no surprise to see this with a free ad-sponsored VPN plan.

VPN in Touch has an oddly-designed website which makes it surprisingly difficult to sign up. There's no Buy button on the front page, for instance. Clicking the Pricing button displays the three plans, but again there's no Buy option.

Clicking a 'Get it free' link displays a panel which says, 'friendly native apps for every platform', but only gives download links for iOS and Android. PC and Windows phone apps are mentioned on the website, but there's no sign of any download.

In our last review we found that a VPN In Touch support link displayed a website warning that "it looks like the help center at support.vpnintouch.net no longer exists." Had the company fixed the problem? Well, in a way. Clicking Help didn't display an error any more, but we weren't taken to a support site, either - it just opened a 'new message' window in our email client.

We sent an email message asking about the Windows client. Such a basic question about the service should get a reply within an hour or two with any decent VPN provider, but a day went by with no response.

The unprofessional feel continued as we looked more closely, and noticed a few other oddities. The home page still had its default title of 'landing', for instance. An About page had an orphaned menu with links titled Plans, Reviews and Support, but none of these worked. Is it really so difficult to spot this stuff and fix it? The website seems to be created with Wix, so it really shouldn't need any great technical expertise. We could do better in less than a day, and we'll bet you could, too.

We installed the Android app anyway, and were surprised to see that the About page told us it was 'powered by Hotspot Shield VPN.' If you want to use Hotspot Shield, you're probably better off signing up direct, than using a provider as feeble as VPN in Touch.

The app itself was almost as basic as a VPN can get, little more than a Connect button and a list of locations. There's nothing here about changing or tweaking protocols, auto-connecting when accessing untrusted networks, using a kill switch to protect yourself if the VPN connection drops, or any of the other options you'd hope to see elsewhere. This does keep it easy to use, but we'd prefer to have at least some features.

Even this minimal level of functionality couldn't quite work as expected. By default, the app connects to your 'optimal server', which we thought we be our nearest UK location. But, no - we were connected to the US, instead, reducing performance and ensuring that sites which enforced UK-only geo-blocking were no longer available. The only way to reliably connect to our closest server was to manually do it ourselves.

The VPN in Touch website claims 'our worldwide servers will let you access any blocked websites or services without restrictions', specifically saying it allows you to watch Netflix and BBC iPlayer. Unfortunately, that wasn't our experience. We connected to the UK server and all iPlayer gave us was its usual 'not available in your location' message.

The app did work with easier targets, for example instantly unblocking US-only YouTube content. But then so does just about every other VPN.

Surely the service would unblock Netflix, as it claimed to do so on the site? No, or at least not the US or UK services, both of which detected the VPN and locked us out.

Normally we would test VPN performance on a Windows system, using OpenVPN and via a wired connection to reduce any speed-related variables. As this time, we were using an Android app, connecting via wifi and IKEv2, it's difficult to come up with any meaningful comparisons.

Real-world testing suggested speeds would be acceptable. They were inconsistent - at one point we got 19Mbps from the UK, then 42Mbps from the US - but that can easily happen with a mobile device, and even the lowest speeds were always very usable.

The review wrapped up with some final good news in our privacy test, as VPN in Touch blocked both DNS and WebRTC leaks, preventing snoopers from discovering anything about our real identity and activities.

VPN in Touch is an unprofessional mess of a service. From its feeble website, to its misleading claims, lack of support and feature-free Android app, it constantly disappointed. Don't give them your time or money – you'll be much better off somewhere, maybe anywhere, else.