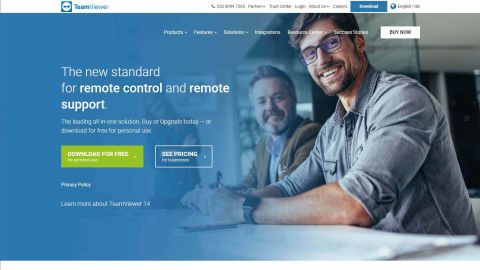 TeamViewer is the Rolls Royce of remote desktop applications, and sadly, it is also priced like an expensive luxury vehicle. TeamViewer does everything you might need, but there aren’t many IT Managers that wouldn’t want something cheaper than this.

As the name hints, TeamViewer is about bringing workers together on via a computer, although it also provides all the traditional features of a remote desktop application.

Developed by TeamViewer GmbH based in Germany, founded in 2005, the current version is release 14.2, on all the operating systems it supports.

A personal use license is free, but are the paid TeamViewer options worth a business spending hard cash on?

One, if not the biggest, selling point of TeamViewer is the operating system support.

A version is available for Windows, Mac OS, Linux, Chrome OS, Android, iOS, Windows RT, Windows Phone 8 and even Blackberry. And, it supports web-based control, for those operating systems not listed that support a browser.

Admittedly some of those options are remarkably niche, but it should cover most business environments irrespective of their diverse system choices.

What TeamViewer offers is a remote access solution that can be expanded to include more than just two people working on a computer, to provide an alternative to physical meetings and brainstorming sessions.

Installation on the PC, for both the host and guest systems, usually requires the installation of a small (23Mb) application. You can run it without installation if required.

As part of the install, you are asked if you want to add the TeamViewer printer driver, for remote printing, use the TeamViewer VPN for extra security, and interface with Microsoft Outlook.

To make all this work as intended, you also need to sign up at TeamViewer, something they curiously fail to mention when you download the app.

Once you have that, and the app installed at both ends, you can establish a link and access the remote computer much like you would if sat at it.

As remote access tools go, the feature set of this one is very comprehensive.

It enables you to chat with the remote user with notes, using VoIP or phone, annotate the screen and even invite others to the session if you need help from another technician.

It also has the best multi-monitor support we’ve seen, where you can see each monitor individually, as a super-desktop, and you can move been these sessions instantly.

And, if you are using it for commercial purposes, you can have lots of sessions open to all the computers you want to control.

The desktop app that initiates connections can also schedule a meeting (using the Outlook integration), create a presentation, phone or video call.

Meeting using the software allow workers in multiple locations to huddle around a virtual computer and see the same computer screen. And, annotating over it from their respective systems.

There are dedicated team meeting applications that do more, and it would be better if they supported another calendar technology than just Outlook. But what it does might be useful, and another justification for the cost beyond the remote access functionality.

With the TeamViewer app in widespread use inside a company, you can also use it as a mechanism to hook into other TeamViewer tools, like those cover endpoint protection and even a remote backup solution.

These features make TeamViewer almost unique, as it isn’t self-contained, but part of an integrated system you can build on.

The interface of the remote connection, like so many of these tools, has been influenced by Microsoft Remote Desktop. As it provides a centrally placed control bar from where you can access all the actions you might need while connected to a remote computer.

On the remote system, a small taskbar window pops up that enables anyone at the computer to get to some of the tools, like chat and annotation.

It also informs them who is controlling their computer, should they need confirmation.

Alongside the application is a web portal where all the activity on the account is logged for reporting, and a list of all the registered endpoints can be maintained here.

Like the installable software tools, the web portal has a very clean and easily understandable design, with menus on the left and information panels on the right.

As you might expect, TeamViewer has a complicated security model, where 2048-bit RSA private/public key exchanged between the sessions and centralised master servers.

All traffic between the different computers uses AES (256-bit) session encryption and https/SSL, so it shouldn’t be practical to intercept unencrypted data as it passes over the internet or LAN.

In addition to the strong encryption model, TeamViewer has two-factor authentication and Trusted devices, for those that want to lock down their solutions and make them even more secure.

As an additional line of defence, any unusual activity (repeated wrong passwords, etc.) the system will enforce a password reset only possible via the email of the account owner.

In summary, the security on TeamViewer is wide-ranging, allowing IT managers to say with reasonable confidence that using this product isn’t likely to compromise their security efforts.

TeamViewer is another remote-control app that is often used by scammers, but that probably says more about the free-for-personal-use aspect than anything specifically wrong with this tool.

At the start of this review, we asked if TeamViewer worth a business spending hard cash on. And, according to the creators, with 1.9 billion live TeamViewer IDs, the answer appears to be a resounding ‘yes’.

However, it isn’t a cheap option when compared with other remote access tools.

Single User covers just one seat and a single session and costs a whopping $49 a month on annual billing. You can access up to 200 devices, but only one at a time.

The Premium license allows for multiple seats, but you are still limited to one session each from a possible pool of 300 devices. It costs $99 (£59.90) per month, again billed annually.

For those wanting multiple concurrent sessions and 500 devices, they must sign up for a Corporate license and pay $199 (£119.90) a month, billed annually for the privilege.

If you want more users, support for mobile devices, or enhanced service, all these come as extras that cost more.

We noticed that it is possible to get a 30% discount on the first years cost of these licenses by going through various portals on your way to sign up. But you will get stuck with the whole undiscounted cost in the second year, sadly.

The cost, if we’re honest, takes the shine off the fantastic functionality that TeamViewer offers, as it is one of the most expensive solutions available.

While large corporations might not concern themselves with these overheads, small and medium-sized businesses might be tempted to use something they know to be inferior, but less expensive.

Another issue is the version updates that are normally released each year.

These fix bugs and add features, but this all comes with a major headache for those who aren’t occasional users.

For any business using TeamViewer to support many clients, having to access each machine and take it through a software update soon becomes a major chore, and one you, unfortunately, can’t avoid.

However, even with these drawbacks, from a functionality and performance viewpoint, this is one of the best solutions available.