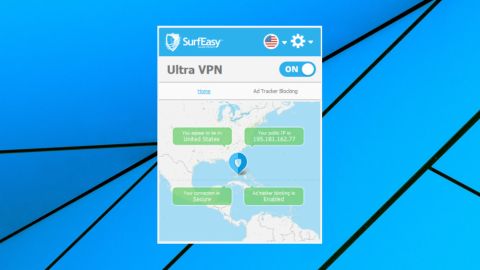 An easy-to-use VPN which could be a smart choice for undemanding buyers, although experienced users will find far more powerful products elsewhere.

SurfEasy is a straightforward Canadian-based VPN, once owned by Opera Software, but purchased by Symantec in 2017.

The service offers 500 servers in 28 countries (or, maybe, 1000 servers - the website uses both figures). Native clients for Windows, Mac, iOS and Android (plus Chrome and Opera extensions) makes it very easy to set up, you can use up to five devices simultaneously, there's 24/7 support via email and live chat, and you get built-in tracker-blocking, too.

A ‘Wi-Fi Security’ feature can automatically protect you as soon as you connect to an insecure wireless hotspot. That's good news if you might forget to do this yourself, and not something commonly available elsewhere.

You can try SurfEasy for free, but not for long. You're restricted to 500MB of free data, you don't get access to all the locations and there's no tracker blocking.

There's no trial, but the company does at least offer a 7-day money-back guarantee, which is says is 'hassle-free' with 'no questions asked.'

SurfEasy describes itself as a ‘No Log’ network, stating that it doesn't store the originating IP addresses of users when connecting to its service, or the applications, services or websites they access when connected.

The company does mention that it performs "automated rules-based traffic management for the purposes of maintaining and improving our service", saying this may require "real-time analysis of internet and data traffic including destination websites or IP addresses, originating IP addresses".

Is this suspicious? We would say no. SurfEasy says this is a real-time process, the information isn't logged, and we suspect other major providers do the same thing, anyway – they just don't bother telling you about it.

The company may disclose personal information "including your usage data" to "governmental authorities or agencies … if there is a good faith belief that such collection or disclosure is required by law". In other words, agencies may not have to get a court order to get hold of data. Making a good enough case that disclosure is ‘required by law’ could be enough.

Opening a SurfEasy account works much like every other internet service in existence. Hand over your email address, choose a plan, pay via credit card or PayPal and the website tells you what to do next.

We downloaded and installed the Windows client without any major issues, then logged in using the SurfEasy username and password we'd just created.

The client has one of those annoying interfaces which looks like a regular window, but it's not. It can't be repositioned, and if you click on another app, the taskbar, the desktop, or anywhere else, it disappears. The developer probably had a really good reason to implement the client this way, but we're struggling to see what it might be.

The mechanics of the client interface work reasonably well. Your default location is displayed on a static map image, along with your current IP and status information, and you're able to choose new locations from a plain text list.

Simplicity is the order of the day here, so don't expect any extras. You can't filter or sort the location list, or see which servers are fastest, or mark some locations as favorites. It's just a plain text menu.

Settings are almost as limited. You can have the client launch when the system starts, turn ad-blocking on and off, and enable or disable its wifi-protection feature (auto-connect whenever you access an insecure wireless network.) But there are no options to change protocol, no sign of a kill switch, no DNS settings or anything else.

This does at least keep the client easy to use, though, and we were happy to see SurfEasy was using the highly secure OpenVPN protocol underneath.

Logging in to SurfEasy's UK server didn't get us access to BBC iPlayer, but for an unusual reason. If the service detects a VPN, it usually warns that the content 'isn't available in your region', but we got a simple 'this content doesn't seem to be working' message. This happened on multiple browsers and devices, so it looks to be a significant issue, but as iPlayer didn't clearly detect our connection as a VPN, it's possible it might work elsewhere.

SurfEasy's US server did allow us to browse US-only YouTube content, but as almost every VPN does the same, we weren't too impressed.

Our faith was restored when we checked the more heavily-defended Netflix, though, and found SurfEasy's US server let us in immediately. That's more than you'll see with many commercial VPNs.

SurfEasy performance was reasonable over short distances in our testing, with our UK server test reporting average speeds of 50Mbps and above on our 75Mbps test line.

SurfEasy did best, surprisingly, in the more distant or unusual locations, where other providers are often very disappointing. For instance, Mexico averaged 25Mbps; Brazil gave us 15-20Mbps; Australia managed 20-25Mbps; New Zealand was around 15Mbps. It may not break any speed limits, but we found SurfEasy was very usable just about everywhere, and that has a lot of appeal.

The positive news continued to the end of testing, too, as wherever we connected, there were no apparent DNS, WebRTC or other leaks, and the client kept us up-to-date with our connection status at all times.

SurfEasy is a nicely-packaged VPN targeted mostly at the privacy novice – people who want a hassle-free, reliable and easy-to-use service which just works. The company mostly delivers, too, although you can get better performance and more features for less money elsewhere.