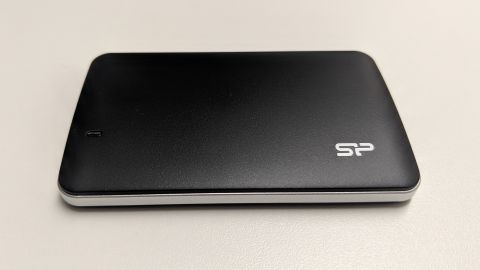 The Bolt B10 external SSD is a reasonably good model, but not one on which we’d spend money. There are other options out there that deliver better performance and are cheaper.

Silicon Power is not a household name even in the storage market: Adata, Samsung, SanDisk or Western Digital have built up much more goodwill amongst customers worldwide.

However, the Taiwanese brand has been investing heavily in marketing and PR recently, while at the same time building the sort of commercial network that allows products to be made widely available online.

Silicon Power sent us the Bolt B10 for review, a 512GB external SSD that retails at Amazon for £158 (around $210). Note that it is temporarily out of stock on Amazon UK at the time of writing, and lower capacity drives are also available.

The B10 is tiny – weighing just over 27g and measuring 80 x 9 x 50mm, it could easily be slipped in a jeans’ front pocket. It is more compact than a standard business card and is a smidgen smaller than the Samsung T5. It sports a smooth black plastic chassis with a silver plastic rim, and a brushed metal finish.

Other than a status light (which blinks red when transferring data) and the letters SP on the front, there’s barely anything else worth mentioning about the drive. You can’t get more minimalist than the B10. Not that this is a bad thing: after all, it is just a storage device, not a status symbol.

Sadly, the designers at Silicon Power opted for a flat USB connector (Micro-B) rather than the more popular USB Type-C one which is present on many competing devices. It comes with a rather short USB cable.

Don’t get your hopes too high. The Bolt B10 is an average performer at best, partly because it still relies on SATA technology which limits its transfer rate to the maximum offered by the host connector (which happens to be USB 3.1 Gen 1).

The drive achieved 418.6MBps and 408.9MBps on CrystalDiskMark when testing read and write speeds respectively. That went up to 461.7MBps and 450.6MBps for Atto when running the same pair of (synthetic) tests.

Here’s how the Silicon Power Bolt B10 performed in our benchmark tests:

Note that the Bolt B10 is initially formatted to the FAT32 file system for legacy reasons; you will need to format it to NTFS or exFAT should you want to transfer big files.

Silicon Power provides two useful application suites with this external SSD. There’s SP Toolbox which has some useful features like the wear out count, a diagnostic scan, a performance test feature and the ability to securely erase data on selected drives. SP Widget offers backup and restore, data encryption and support for Dropbox amongst its main features.

The G-Technology GDrive is the best value-for-money external SSD we’ve tested to date. It is larger than the B10 but it’s faster and cheaper, plus it is a Western Digital brand which means better support, in theory.

The Adata SD700 is the cheapest 512GB external SSD on the market. It is IP68 rated which means that the device is dustproof and waterproof, and it’s slightly bigger and faster than the B10.

Then there’s the newly announced Silicon Power Bolt B75 which is bigger but sports a USB Type-C connector, and we’ve heard that it’s likely to be cheaper than the B10 (we’ll keep you updated as soon as we hear something concrete on that score).

And those who want a portable SSD without having to pay through the nose can opt for an external enclosure and pair it with an internal SSD, which are far cheaper. Such a DIY solution will get you a 480GB external solid-state drive around £77 ($105), less than half the price of the B10. Sure, it won’t be as compact or portable, but it will be fast enough for most tasks.

With a three-year warranty and an attractive minimalist design on one hand, and a rather expensive price and average performance levels on the other, it’s hard to recommend the B10 as it currently stands.

The Adata SD700 - which is IP68 rated and far cheaper - and the G-Technology G-Drive Slim - which is faster and cheaper, albeit in a bulkier format - are better options.

Silicon Power doesn’t produce its own components and is therefore reliant on third-parties that are often competitors to procure these, a state of affairs that put the company at a clear disadvantage compared to others.