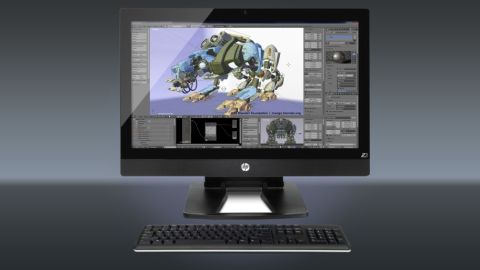 Although the first-generation HP Z1 felt like a proof of concept, the HP Z1 G2 is a truly powerful all-in-one. It may not be quite enough to make desktop 3D workstations obsolete, but it undoubtedly has a place in design studios.

The HP Z1 workstation caused quite a stir when it launched two years ago, since it's the only all-in-one that can be easily upgraded by its owner.

The 'Z' in its name applies to all HP's professional workstations, but also to the shape of the hinge in the Z1 - you fold the screen over, lower it, open two latches at the base of the display, then the screen pops away from the rest of the unit, revealing its internal components.

Plastic handles are attached to the power supply, graphics card, 3.5-inch storage caddy and the main fan assembly, which all lift out with a firm tug.

With the HP Z1 G2, this unique design has been retained, but with a better overall specification, including more powerful graphics cards and up-to-date processors, 802.11ac wireless and 20Gb/s Thunderbolt 2 ports that make the HP Z1 G2 more useful as a replacement for a traditional desktop workstation than the previous version.

The HP Z1 G2 has a black plastic chassis at the front, with a single aluminium plate covering the back, and an HP logo in the centre. It's extremely bulky, weighing 21.3 kg, and the main unit is far thicker than most all-in-one designs.

There are two USB 3 ports on the right, along with two 3.5mm audio connectors and an SD card slot. A removable DVD or Blu-ray writer is on the left, and there are more ports at the bottom: 4 USB 2, Ethernet, Displayport and 3 more analogue audio connectors, along with optical audio. These ports at the bottom are hard to reach, as they're positioned around the back of the unit close to the stand.

The defining characteristic of an all-in-one is its screen, so colour, brightness and contrast levels have to be accurate if the system is going to be useful for graphic design. The LED-backlit 27-in IPS panel in the HP Z1 G2 is manufactured by LG, with a maximum pixel-resolution of 2560 x 1440. It can be ordered with or without touch sensors.

There's a six-speaker sound bar directly below the screen and a 1080p HD webcam built into the top, which takes 2MP still photos. HP bundles a wireless chunky keyboard and a fairly bog-standard mouse with the HP Z1 G2.

That might sound expensive, but it's part of the territory with design workstations. Intel Xeon processors cost more than Core i7 chips, and are required for ECC memory support, which is crucial for engineering markets, where even the tiniest memory error in a blueprint could have catastrophic safety consequences.

The Quadro K4100M explains the large difference in price, as it's the most powerful card you can have fitted in the HP Z1 G2. It's not really for gaming, but has certified drivers for guaranteed performance in design applications and Cuda support to accelerate functions in software that supports it.

Part of the second wave of Nvidia mobile graphics cards based on the 'Kepler' architecture, the Quadro K4100M has 1152 shaders, a 256-bit memory bus and 4GB of GDDR5 memory.

Although the Quadro is removable, its MXM (mobile PCI-Express) connector means it can't be swapped out with a standard off-the-shelf graphics card, and similarly the LGA 1150 processor is limited to the range available when you order.

That's the only major restriction though. You can fit either a single 3.5in hard drive, or two 2.5in drives into the HP Z1 G2. Thunderbolt 2 connectors are a real benefit too, given the bandwidth they offer. Hook up the HP Z1 G2 to an ultrafast external storage array such as a Promise Pegasus R2, and you'll get faster speeds than with a typical NAS over gigabit ethernet.

We tested every piece of hardware in the HP Z1 G2 with synthetic benchmarks and real applications to get a feel for its performance in 3D design software. The big question for design studios is whether the HP Z1 G2 is a worthy replacement for a traditional desktop workstation.

Having an all-in-one is a lot more convenient, as it significantly reduces cable clutter and frees up space in the office, but it's not worth it if you can no longer use the software applications your business relies upon.

Graphics card performance is usually higher when using a processor with a high clock speed rather than a large number of CPU cores. The HP Z1 G2 is limited to a single four-core CPU though, possibly because of the difficulty in fitting a motherboard that could support a more advanced Intel Xeon E5 or E7 CPU into an all-in-one chassis.

In Cinebench 15 the combination of the high clock speed of the Intel Xeon E3-1245 v3 and the power of the Nvidia Quadro K4100M included in the HP Z1 G2 produced a result of 661 in the CPU test and a score of 107 fps in the OpenGL test.

In comparison a desktop workstation with a pair of lower-clocked dual Intel Xeon E5 2670W processors, with a total of 20 cores but only running at 2.5 GHz, managed 93.6 fps in the same test. That said, its CPU score was considerably higher: 2772.

SPECViewPerf, a benchmark suite of tests that mimics real-world applications, was 25 percent to 33 percent quicker on the HP Z1 G2 as well.

3DS Max is a great CPU test as it efficiently makes use of multiple cores. The advantage of additional CPU cores really starts to show with more detailed modelling work.

We rendered a few scenes on the HP Z1 G2, the bundled Underwater test scene and the Studio scene, in both default resolution and 1080p. At standard resolution, the total time of four minutes 28 seconds is exactly twice the length of time the aforementioned 20-core desktop workstation took, and at 1080p it took close to 20 minutes on the HP Z1 G2, a task the workstation chewed through in under eight minutes.

3DMark results were similar to our other 3D tests. 3818 points in the taxing Fire Strike benchmark is an excellent result.

But it's not all good news on the 3D front. While a Quadro is a great choice for 3D modelling software, it's not a gaming card. We ran the built-in Tomb Raider benchmark on both High and Ultimate detail settings, at 1080p and 720p. At 1080p on HP Z1 G2 struggled to hit 30 fps on Ultimate detail, and only produced 60 fps consistently at 720p with the detail setting turned down.

If you're primarily looking for an all-in-one that's great for gaming, the HP Z1 G2 is not the best choice.

Although we used a colorimeter to accurately test the display, the superb image quality and bright picture is obvious from the moment you start using the HP Z1 G2. The colorimeter results confirmed what our eyes told us - 440 cd/m2 is an exceptionally high maximum brightness level.

With 590:1 contrast, a Delta E reading of 1.09, 100 percent sRGB coverage, 84 percent AdobeRGB and 76 percent NTSC, the colour reproduction doesn't beat the greatest professional-quality displays, although it's still good enough for professional use.

But the uniform brightness is an excellent result. Our colorimeter only measured a maximum dip in brightness by 4.2 percent in the bottom left corner, when cheap displays can sometimes vary by a lot more.

The Micron SSD didn't perform as well as the fasted drives on the market. In CrystalDiskMark, we recorded a sequential transfer read speed of 430 MB/s but a write speed of 232 MB/s. A top-end SSD such as the Samsung 840 Pro manages 520 MB/s read and 500 MB/s write speeds.

The beauty of the HP Z1 G2 is that you aren't limited by the options available from HP. While you can't fit both a 2.5in SSD and a VelociRaptor, since Western Digital encloses the VelociRaptor in a heatsink that uses an entire 3.5in drive bay, you can opt for a faster 2.5in SSD and a 2.5in hard disk, or replace the mSATA Micron SSD with a different brand.

We also tested the wireless card, and measured 398 Mb/s in a file transfer test, using a LinkSys EA6900 router. While 802.11ac can go faster, and we expect most studios will use traditional wired networking, it's still great to see wireless speeds that are much faster than 802.11n.