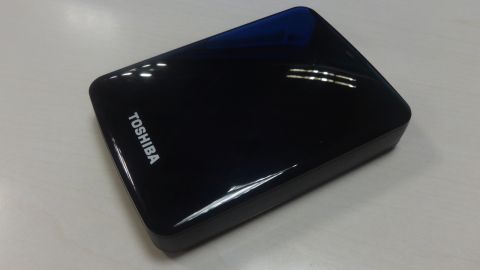 This unit is small enough to fit in your back pocket, solidly built and it doesn't cost the Earth. What's not to like about it? If only it had a better hard drive, it would be the one to beat.

The interest in traditional hard disk storage solutions has picked up since the beginning of 2014 after a lull that lasted about two years (since the introduction of the first 4TB hard drive).

This coincided with the meteoric rise of the solid state drive, one that stole the storage limelight as prices fell and storage capacity shot up; but now spinning hard disks are back with a vengeance.

Toshiba has quietly introduced a number of affordable external storage devices, and the HDTC720EK3CA, a tiny 2TB external hard drive sporting a USB 3.0 interface, currently has the highest storage capacity for a 2.5-inch form factor and is part of the company's STOR.E Canvio range.

At well under £80 (about $130, AU$ 140) at Amazon, it is about 15% more expensive than the now discontinued HDTB120EK3CA, which has the same storage capacity and was part of the STOR.E Basics range.

Both are cheaper than all the comparable internal hard disk drives on the market, a weird but logical outcome based on demand and supply.

Despite costing more to build, external drives sell for cheaper because manufacturers such as Toshiba and Seagate are ready to sacrifice margins for sales volume.

The main difference between the two Toshiba drives – other than the price and the design – boils down to the bundled applications.

The Canvio is preloaded with Pogoplug and NTI Backup Now EZ which allows you to access the drive remotely and backup your data respectively. The former alone costs about £18 (about $30, AU$32) and comes with 10GB online cloud storage for free; you can't buy NTI's application on its own.

Its corners are slightly rounded with two glossy sides and a white LED on the front that lights up when the drive is on. Getting it to work requires a free USB port (USB 3.0 preferably).

A sticker and four tiny rubber feet are located on the underside of the drive. There didn't seem to be any easy way of prying the unit open to extract the hard drive for use, say, in a gaming console like the Xbox 360 or the PS3.

That compares poorly with the Samsung SpinPoint M9T drive, released this year that has a higher platter density (three 667GB platters), four times the cache size (32MB) and is way thinner (9.5mm versus 15mm). As a side note, not surprisingly, Toshiba's bare drive costs about 25% more than its external version.

This drive is great value for money if you want something small, with ample storage, that can slip in your back pocket, and has some interesting added features (Pogoplug, free online storage, backup application).

There's nothing headline-grabbing about its design and performance, but it will allow you to transfer oodles of bytes cheaply and quickly. Since it is USB-powered, you won't need a power connector to make it work, either.

Put simply, Toshiba's 2TB Canvio USB 3.0 drive cannot be beaten (except by Toshiba's own Basics range) when it comes to affordability in terms of TB (Terabyte) per unit volume.